This one comes to us from Dave in Washington:

“The Regal is not meant for Americans.

I went to visit my son when he graduated Boot Camp and insisted on renting a Buick while I was there for a week. Nice looking, I’ll give you that. But then there’s owning one. Let’s try to put two cups of coffee in the cup holders, then try to remove the first cup.

Let’s talk about driving the car, after the engine tells the computer it’s time to go the transmission decides which gear to be in, “oops changed my mind” says the transmission. This was the norm for a car that has no low end torque. Very jumpy and certainly not smooth and comfortable.

Then there’s the way I felt when driving the car, No room for the knees. Lord only knows why a FWD car can’t have knee room.”

Dave — your observations are, well, a mixed bag. For starters, keep in mind that you drove a rental car — who knows how much abuse, negligence, and mishaps the poor fella has had in its short life. 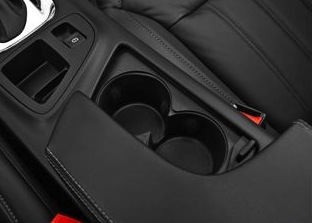 Now, maybe it’s just me, but judging a car by the amount of cup holders it has, or their ability to hold two cups of coffee at once, is silly. Heck, forget about the fact that the Regal has one of (if not the) best suspension set-up of all front-wheel drive cars. Forget about the fact that this excellent suspension design results in a very engaging driving experience. Forget about its flowing and refined appearance, the well-designed, cozy, and nicely-appointed interior, the outstanding Buick IntelliLink infotainment system, or the excellent 2.0 liter turbo-charged engine. Forget all of that and focus on cup holders.

With that train of though, we can think of a few vehicles that can hold two cups of coffee simultaneously better than the Regal. But did you notice the very useful and well-design bottle holders in the front doors? And for the record, the one time I needed to fit two cups into the Regal’s front cup holders, I had no problem doing so. What size are your cups? Ventes from Starbucks?

“Let’s talk about driving the car”. Ok, let’s. It all depends on which rental Regal you had — the one with the 2.4 liter four-banger, the eAssist, or the 2.0 liter turbo. My guess is it was the base 2.4 which is no longer in production starting with the 2013 model year.

As for there being no room for your knees… how tall are you? I’m 5’7 and had no problem with knee room. In fact, the Regal has nearly as much front leg room as the larger Acura TL and more room than Audi A4 and Volkswagen CC, just for comparison. Now, leg room isn’t the same as knee room, and the Regal — just as the new Chevy Malibu — would probably benefit from a slightly longer wheelbase. But I can’t help but wonder if you tried moving the driver’s seat back.

What do you think of Dave’s comments? Sound off in the comments below.

PS: want to be featured in a GM Authority Mailbag? Write to us here.