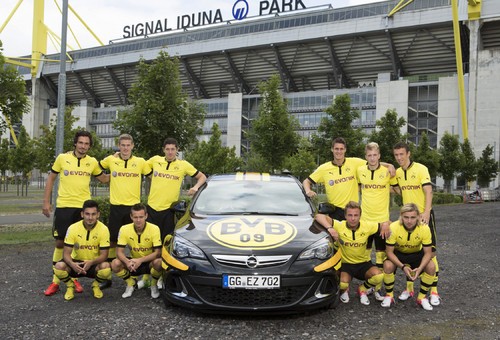 GM Vice Chairman and Opel chief Steven Girsky has been spending the majority of his time in Europe while restructuring The General’s loss-making European operations. Traditionally a New York Jets fan, Girsky — who took over from Karl Friedrich-Stracke as the head of GM’s Opel division this summer — has become a fan of European soccer and in the process may have found inspiration for GM’s ailing European brand.

During GM’s third quarter earnings results call, Girsky described Borussia Dortmund — a German soccer club that competes in the Bundesliga, the top tier of the German football league system. It just so happens that the team has recently earned Opel’s sponsorship — the brand’s first sports sponsorship in nearly a decade. Girsky spoke about how the team went from an also-ran to a feared competitor in a period of a few short years.

“They’ve hired a new coach who’s very charismatic. He’s a brand ambassador for Opel,” Girsky said. “The team has turned themselves around from being near bankruptcy to being one of the best teams in Germany.”

During the call, an analyst asked Girsky: “So this is a metaphor for the brand? A football club that turned itself around?”

“It’s uncanny how similar it is”, Girsky countered. “By the way, they beat Real Madrid last week”, he added.

Two weeks ago, GM CEO Dan Akerson visited Opel’s headquarters in Rüsselsheim and affirmed the automaker’s plan to the Opel 2022 plan — which calls for for 23 new models and 13 new engines for the brand over the next four years, and a complete turnaround in a decade.

We sure hope Opel will follow the success found by Borussia Dortmund… unfortunately, it seems that sacrifices — in the form of plant closures and layoffs — will have to be made to reach Opel’s ultimate goal.

Hat tip to Doris B. via Auto News