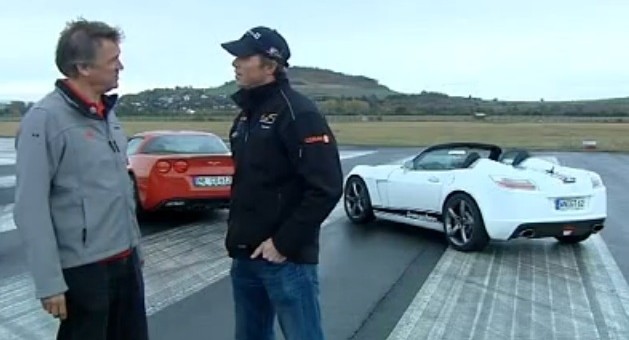 Sometime back in 2008, tuning company Irmscher (which specializes in Opel/Vauxhall cars) created the Irmscher i40 — an Opel GT with a V8 engine. A little bit after the i40’s debut at the 2008 Geneva Motor Show, two German gents took a C6 Chevy Corvette as well as the hotted-up Opel roadster to a closed track and did what any car guy would do — put both cars through their paces.

For starters, the duo of Germans — consisting of pro race car driver Dirk Adorf and data man Albert Königshausen — drag raced both cars (the Vette came out ahead); then, the Opel was treated to some high-spirited doughnuts, followed by some track runs (in the rain, mind you) and the obligatory slalom cone runs (also in the rain).

What makes this video all the more intriguing is the fact that the Opel GT was briefly available in the United States as the Saturn Sky — a fact automotive enthusiasts (and all GM fans) undoubtedly remember. But we hope that in the process of transplanting the compact Kappa-based Opel roadster with the large and heavy V8 (we’re guessing it to be a 6.0L LS2), Irmscher also gave the car a set of reworked brakes and suspension components, since adding more weight over the front axle in a rear-drive vehicle usually results in an increased amount of turn-in understeer.

Nevertheless, watching this video (all in German, of course) got our blood pumping — and made us lust for the return of a RWD roadster such as the Saturn Sky/Opel GT, perhaps as a Chevrolet using GM’s new Alpha platform.

Do you speak German? If so, we’d love some help on the translation bit here.

Are you an owner of an Opel/Vauxhall GT or Saturn Sky/Pontiac Solstice? If so, does the video tickle your interest in swapping your Ecotec four-banger for a nice and beefy LS3?