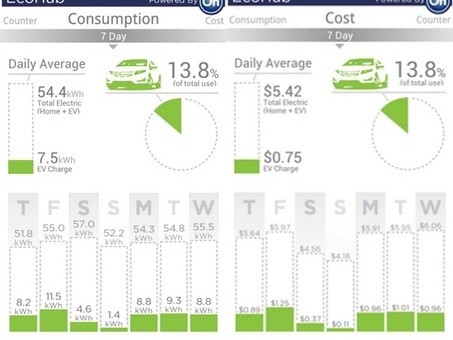 Chevy Volt owners looking to know the cost of charging their car will soon be able to do just that, thanks to a new OnStar app. Called EcoHub, the app is currently being tested on a limited basis with Volt owners residing in the Pecan Street demonstration project, a smart grid living community in Austin, Texas.

The app provides Volt owners the ability to view energy cost and consumption data, showing how much it costs to charge the Volt as well as to power the rest of their home — removing the anticipation of the arrival of the (monthly) utility bill. EcoHub works by pulling overall home energy data (provided by an energy data source, such as a utility or smart meter company) and combining it with vehicle charging information from OnStar. The data is then aggregated to show how much energy is used on a daily, monthly, or yearly basis, while conveying how much of the total energy use was used to charge the Volt.

In addition, the EcoHub app includes a “Ticker” that shows Volt drivers the national values for Total Miles Driven, Total EV Miles Driven, and Gallons of Fuel Saved — allowing Volt owners who already love to keep track of and compare driving statistics to do so from their smartphones while being part of a national/global movement in reducing fuel consumption.

Even though EcoHub is being tested with Volt drivers in Pecan Street project at first, OnStar hopes to make it available for all Volt owners in the near future. The app is part of the Smart Grid research initiative made possible by the U.S. Department of Energy and carries the potential ability — provided necessarily partnerships are made — to check stats of other devices in the home.

Here’s a brief overview of the EcoHub app:

Besides the fact that it’s really, really cool, the EcoHub app has the potential to take the guesswork (along with the Fear, Uncertainty, and Doubt, or FUD) out of charging electric vehicles such as the Volt. And that should decrease the unfamiliar barrier to entry preventing more Volts sales.