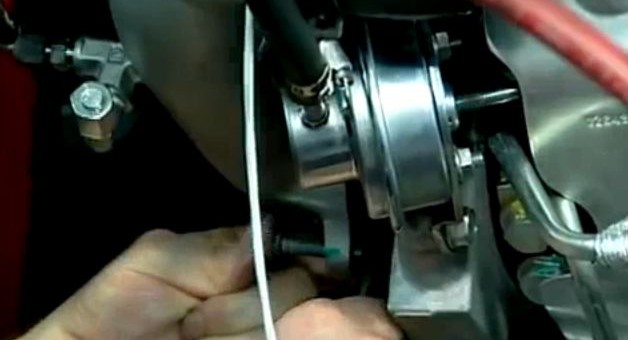 If you’ve never heard of a tilt sled or seen one in action before, you owe it to yourself to watch this video. The testing device is used to replicate the kind of high-G, high-revving conditions that engines like the new fifth-generation small-block V8 will face in the 2014 C7 Corvette. And though every GM engine gets put through the paces on the tilt sled, none of them are taken to the kind of limits that performance mills like the new LT1, or the LS3, LS7 and LS9 before it. This makes watching these purpose-built V8s extra entertaining on the machine, as they quickly pitch and roll to the algorithms that replicate a race track while seemingly screaming for mercy.

However, there’s an Easter egg here. While the beginning of the video shows the new LT1 revving away, the mill seen in the next test, on the tilt sled, is not the LT1. The LT1 does not have two intakes connected to a single air box. Nor does it have a turbocharger, let alone two of them. The dead giveaway that the latter engine is in fact a twin-turbo V6 — more than likely the 3.6L twin-turbo engine destined for at least the 2014 Cadillac CTS — are the aforementioned pair of air inlets that are visible beginning at 1:08 of the video. Here’s the evidence to support this theory.

Before that, we see a technician working on what appears to be a turbocharger’s aluminum housing (according to a thorough analysis by CorvetteOnline.com) coupled with a bead-rolled outlet that keeps the piping together as the boost pressure intensifies.  There’s also a vacuum canister for the wastgate seen in the video, along with water and oil lines running to the center section, the heat shield, and an exhaust downpipe.

Lastly, the noise doesn’t sound like any GM V8 engine we’ve ever had the pleasure of listening to, as it’s simply not throaty enough. And while we’re expecting boosted variants of the new 6.2L LT1 V8 in the future, we’re pretty sure this isn’t it; those engines aren’t due for  a while, but the twin-turbo 3.6L V6 is expected to debut as soon as next year.

Also of note, at the end of the video, the computer reads “March 2008” on the bottom left of the screen, which could either mean GM hates keeping track of time, or the footage is a few years old, meaning that the engine has been in the works for a while now. To further amount the evidence that this engine is a twin-turbo V6, the bottom right of the same computer screen clearly reads “3.6L”.

Also something to think about: while this is exciting, we wonder what the output of this boosted V6 will be like compared to the LT1 V8. After all, the preliminary ratings of the LT1 (450 hp and 450 lb.-ft., while returning 26 mpg with the ability to run on 87-octane) seem to make the case of a twin-turbo V6 mighty thin. Unless the LT1 is actually pushing closer to 500 horsepower/torque. Here’s the video for your enjoyment: