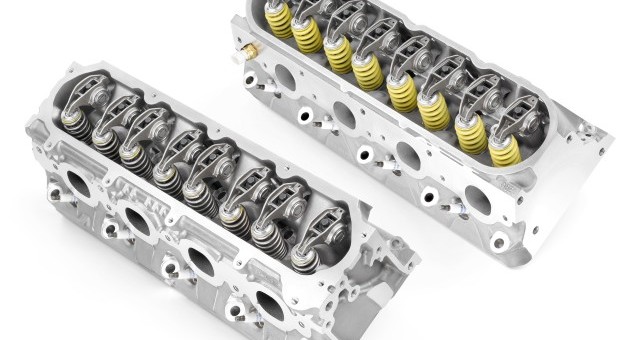 Continuing with our in-depth write-up of the 2014 Corvette C7 engine, the LT1, we continue with hopefully answering the questions many of you have, breaking down every part of the fifth-generation small-block V8 piece by piece.

Starting with the intake manifold, GM resorted to an all-new design — like 99.9% of the rest of the engine — which this time around features a straighter airflow into the combustion chamber, and increases airflow 3.6% over the LS3. More impressively, the imbalance of airflow is reduced 50% compared to the outgoing small block. What GM is calling a “runners in a box” design, the intake manifold is composed of composite material which keeps the weight low while maintaining a high thermal tolerance, while air is fed through an 87 mm-wide throttle body. Passing through the intake manifold brings the air to the cylinder heads, sending the airflow to the combustion chamber — which we covered in the first part of this deep-dive. The cylinder heads themselves feature a completely new design from the old model, with the intake and exhaust valves being reversed from the LS3 engine, with revised valve geometry and revised pushrods. The heads consist of 319-T7 cast aluminum with 59.02cc combustion chambers. The intake valves remain huge, at 2.13 inches (54mm) in diameter, which is actually one millimeter smaller than the LS3 intake valves. The intake ports have also been raised to make room for the direct injection system. After combustion occurs, the exhaust exits through 1.59-inch (40.4mm) hollow sodium exhaust valves. And based on their findings through millions of simulation hours of computational fluid dynamics testing , the valves are held at new, 12.5-degree intake/12-degree exhaust angles, vs. the Gen 4’s 15-degree angle setup, and as we covered in part one, are splayed slightly to reduce shrouding and enable greater airflow. The valve springs are also 2mm taller than the outgoing LS3, and the 8.7mm wide pushrods are stiffened. Additionally, deactivation lifters are applied on the pushrods dedicated to cylinders 1, 7, 6 and 4, to allow the engine to operate in V4 thanks to active fuel management (AFM). Powering all of the valve lifts is the single hydraulic-type camshaft equipped with a tri-lobe for fuel-pump drive. The cam has been purpose-built to accommodate AFM, a 14mm gross intake lift, and a more refined low-speed operation, and more flexible crank angles than the LS3.

Finally, the exhaust manifold. Borrowing a design seen from the short-header exhaust manifolds found in the mighty LS7 and LS9 engines, this all-new manifold benefits from the latest analysis software to minimize restriction, while maximizing volumetric efficiency tuning of the exhaust gas as it passes into the “wide mouth” collector. Engineers state that radiate noise reduction is reduced this time around, but judging from the swollen exhaust tubes we saw running off an LT1 engine inside the bowels of the GM Powertrain World Headquarters, there’s going to be plenty of joyful sounds coming out the tail of the all-new C7 Corvette.