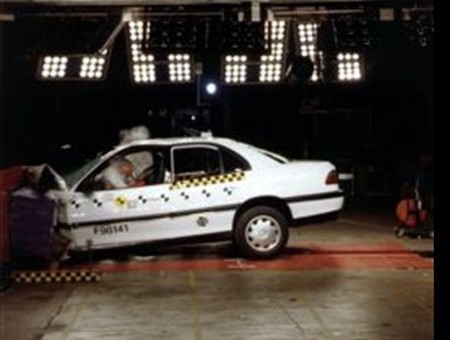 More than a decade ago (in 1998), the European New Car Assessment Program (NCAP) performed its series of crash tests on 1998 Opel/Vauxhall Omega — the flagship sedan marketed by the sister brands at the time. At the time of testing seen here, the Omega, sold in the U.S. — with specific changes — as the Cadillac Catera and related to Holden’s Commodore, was one of the older designs for a car in its class, and thus didn’t have passenger or side-impact airbags as standard equipment: they were merely options.

As such, the NCAP awarded the midsized Omega three stars (of five), with the rating rising to four when side airbags were added. In addition, chest injury risks for the driver were reduced when the side-impact bags were added — and for good measure: look at how much “flex” there is in the side crash test. NCAP deemed the Omega’s front-impact performance “reasonable”, but noted that the driver’s feet and ankles were at risk of being injured due to the amount of brake pedal travel rearward.

The Omega received two of four stars for pedestrian protection, with a score of 16, but the NCAP noted that parts of the hood provided poor cushioning.

Watch the full video of the battery of tests of the 2.0 GL/GLS models in left-hand drive configurations:

Man do GM’s modern mid-sizers put those of the 90s to shame when it comes to crash-worthiness (along with driving dynamics, design, technology, fuel economy, and pretty much everything else). Don’t you love progress?