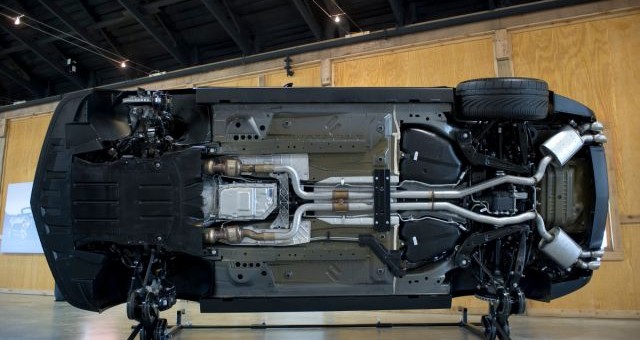 The Camaro ZL1 is a beast. A powerful, roaring, and brawny beast that also happens to be as maneuverable and controllable as an agile power lifter (if there is such a thing). And a big part of what makes the ZL1 so special is the engineering that went into turning a great pony car into an impressive race car, especially the intricate aerodynamic improvements made to the car. To demonstrate these aerodynamic qualities, GM took a real ZL1, removed three of the wheels and tires, and then placed it on a stand that flips the car 90 degrees. Then Camaro chief engineer Al Oppenheiser gave a lucky fella this brief yet detailed tour of the ZL1’s underbelly:

Starting with the very front of the ZL1, Oppenheiser points out the redesigned upper and lower grilles, front splitter, and brake cooling ducts (the veins) all work together with the hood extractor to push air through and out the hood in an effort to increase downforce. The front fascia works in conjunction with the belly pan, which is designed to manage air flowing under the vehicle while helping to reduce drag. The pan features unique ducts to to cool the transmission tunnel with the underbody air, while “ski ramps” channel additional air for brake cooling.

The (NPP) active exhaust system (straight from the Corvette) uses an induction vacuum to drive the valves in the back. Perhaps more interesting is the fact that the system is a straight-through exhaust, with Oppenheiser describing that if one were to drop a golf ball in through one of the exhaust tips, it would be able to roll all the way to the catalytic converter without hitting anything — a quality that exemplifies the fact that the ZL1’s exhaust system uses all the engine sound possible without any obstructions. Plus, the start-up mode will let your neighbors know when you’re about to leave (which may not be such a good thing). At the least, Al’s neighbors know when he goes to work every day.

And when it comes to comparing the ZL1 to the Mustang GT500, Oppenheiser makes it a point to mention that all of the equipment — including all of the cooling gear for the oil, transmission, and differential, is standard on the ZL1 — the car offers no options save for cosmetic items such as stripes, wheels, body color, interior materials, and a sunroof — while the GT500 has performance-based options up the wazoo. As such, the ZL1 is fully track-capable out of the box; it has seen race tracks around the globe and was the fastest Chevy around the Virginia International Raceway (VIR), with the exception of the Corvette ZR1. And unlike Ford, which outsources a good amount of performance work to Shelby (and Roush), The ZL1 is all GM engineering.

The ZL1 utilizes a new high-efficiency fuel pump. GM engineers performed computer analysis to see where gasoline sloshes around in the fuel tank and added extra pick-up points in the outermost areas capable of using every ounce of gas in the tank — something that isn’t always possible when fuel is moving around with the car. Oppenheiser recommends pitting first if the ZL1’s low fuel warning is active.

The rear diff uses pre-cooled liquid from the oil cooler that’s capable of reducing temperatures of the diff by 100 degrees Fahrenheit. 100 degrees! And that’s standard on every ZL1.

The ZL1 also has those new half shafts that have been the talk of GM enthusiasts since the car’s release. The shafts are specifically designed to work with the ZL1’s powerful differential to handle the loads that go through the driveline while eliminating wheel hop of those beefy 305s. Oppenheiser said that it was the duty of two engineers during the ZL1’s development to make the car fail. Do as they might, they could never break the half shafts or the differential.

Ultimately, the ZL1 is a car worthy of having “race” in its name. It’s not a straightener like some other segment contenders (ahem, GT500), and its aerodynamic properties can prove advantageous — qualities that we appreciated during our time with the ZL1.