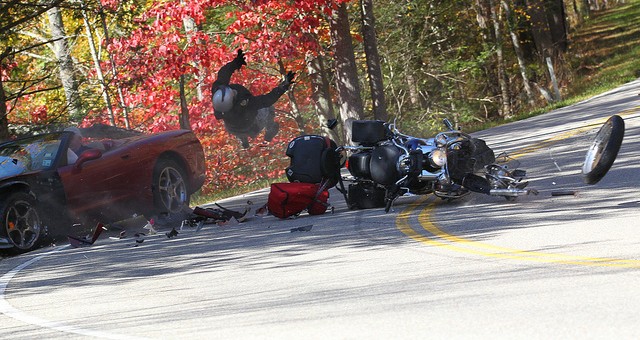 You may have heard of, or even driven on the Blue Ridge Parkway. Running along the ridges of the Appalachian Mountains, the road is one of the most scenic and entertaining driving routes in the world, with its most famous part being the Tail of the Dragon: an 11-mile-long twisty stretch of asphalt with a whopping 311 curves.

And it was on a part of the (officially-named) U.S. 129 that a member of the Corvette Forums was involved in a head-on collision with a motorcycle in his C5. The accident was captured by the photographers at US129Photos.com, who capture drivers ripping through the Dragon’s twisties on a daily basis:

What seems to have transpired was that the biker didn’t plan the turn correctly, or wasn’t paying enough attention to the road, and ended up riding across the double yellow lines into the opposite lane, ramming the C5 right in the front-most part of the driver-side quarter panel. Upon impact, the motorcyclist was ejected from his saddle and thrown into the air, where he did a somersault.

Luckily, the Corvette driver and the biker both came out ok, although the poor lad on the bike may have broken a bone or two in his arm, according to LSXTV.

The whole event is wildly scary to us, and our own Manoli Katakis perhaps summed it up best when he wrote “eeesh!”. More than anything, watching this video and viewing the accompanying photos reminds us more than ever to pay attention while driving, keep our eyes on the road, and operate the vehicle in a focused state of mind.