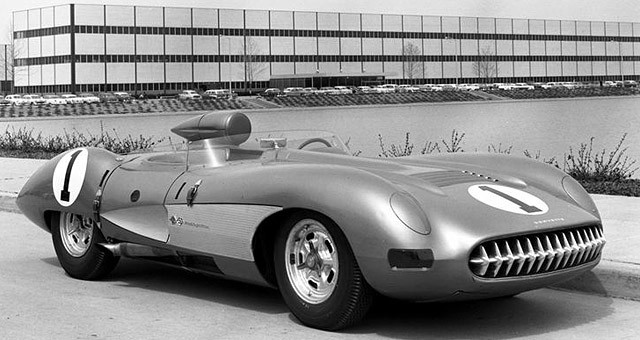 Back in 1957, General Motors gave birth to a new kind of Chevrolet that would begin the short-lived era of manufacturer-sponsored racing. Titled Chevrolet Super Sport (experimental), the racing effort was centered around the creation of an official Chevrolet race effort meant to culminate with the car’s participation at the 24 Hours of Le Mans. The project was staffed by a team of engineers and designers headed by Corvette chief engineer Zora Arkus-Duntov.

Less than half a year was allotted for the project, the goal of which was to create an experimental model Corvette that would compete in racing events all over the world. The actual project took an impressive five months from start to finish and resulted in a unique Corvette with an extraordinary power-to-weight ratio. The Vette SS weighed in (dry) at 1,850 pounds (839 kg) — making it nearly a thousand pounds lighter than a production-spec Vette.

In addition, the Corvette SS was powered by a production-spec 283 cubic inch Chevy V8 making 375 horsepower (280 kW) and had unheard-of aerodynamic capabilities and impressive road adhesion qualities, all of which allowed the car to reach a top speed of 183 mph (295 km/h) at Sebring. Here’s a narrated story of the creation of the Corvette SS (should make for a great Sunday evening short flick):

Unfortunately, the Corvette SS only had one official race — at the 12 Hours of Sebring, where it completed 23 laps before retiring. Soon after, the Automobile Manufacturers Association (AMA) banned manufacturer-sponsored racing and the marvelous SS was relegated for use as a test mule chassis for the test track.

Nevertheless, the effort was characterized as a technological success and the Bow Tie brand, along with electricians, craftsmen, mechanics, and stylists, applied concepts learned from the design and development of the Corvette SS to production Corvettes. Of course, we at GM Authority are thankful that somewhere along the line, common sense prevailed and manufacturer-supported racing efforts are no longer prohibited, but that’s an entirely different box of parts.