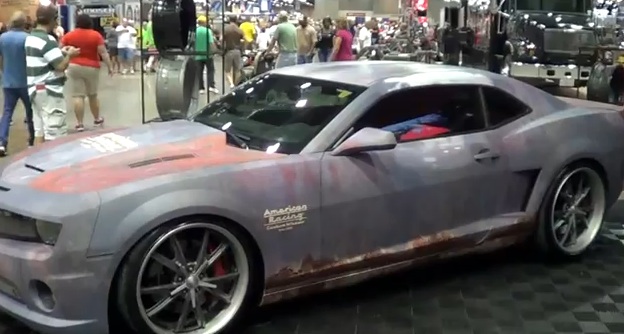 Unlike another rat rodded fifth-gen, the Chevy Camaro you see here didn’t undergo days’ worth of sanding and other forms of abuse; instead, this car — seen at the 43rd annual National Street Rod Association Show in Louisville Kentucky — wears a wrap to furnish it with a look that gives off the impression that it’s been to hell and back… even though it hasn’t.

According to ScottieDTV’s video, the 2010 SS RS is supercharged, wears an aftermarket spoiler, contains functional brake cooling ducts in the quarter panels, and is finished in these American Racing wheels. The rat rod wrap looks very realistic while the custom front grilles make it all that much more sinister. Ironically, as with most cars today, the front and rear bumpers of the car are actually made of plastic… but the wrap throws them some rust their way, anyway.

But the Camaro doesn’t carry the rat rod theme to the interior. Instead, the cabin is finished in leather, suede, and carbon fiber accents — which makes sense given that it likely isn’t pleasing to spend time in a cabin that’s all beat up, at least aesthetically.

So the question is, would you rat rod your Camaro? If so, would you wrap it like the car above — or modify the original surface as in this example?