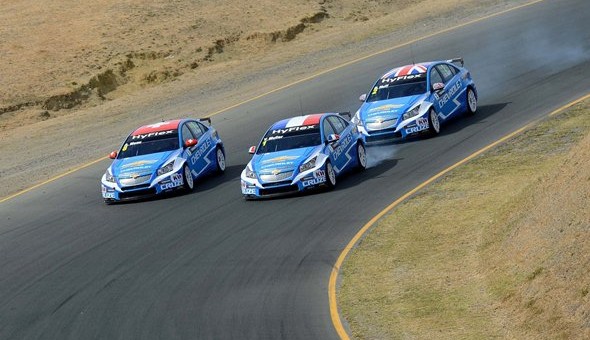 The already-triumphant Chevy WTCC team claimed two wins at its U.S. debut in Sonoma, Califonia this Sunday, with Yvan Muller wining the first event and Rob Huff winning the second.

Muller clinched a narrow victory during the first heat, followed by title rival and Chevrolet teammate Rob Huff, who was only a half a second behind at the checkered flag. The win marks the eighth victory for Muller this season.

Unfortunately, team mate Alain Menu experienced power steering troubles sustained after contact with Gabriele Tarquini at the start of the race, dropping the third factory Cruze from the competition after nine (of the thirteen) laps.

The three Cruzen ran closely, a usual sighting in the WTCC series, until Menu decreased his speed entering the Carousel turn corner on the fourth lap. He pitted at the conclusion of the lap, outlasting an encounter with the brush lining the Sonoma track.

After less than an hour after the completion of the first race, the second heat commenced. Rob Huff took first after Muller was penalized for spinning out then-leader Franz Engstler’s BMW 320 TC in the Carousel corner. BMW driver Norbert Michelisz came in second and Gabriele Tarquini was third in the SEAT.

Following power steering problems in the first race, Alain Menu experienced a trouble-free run and came in fourth — up from 10th on the grid. Muller’s penalty consisted of having to perform a pit-lane drive-through; his WTCC Cruze up in fourteenth and leaves the U.S. with 315 points, tied with Huff at the head of drivers’ standings.

At the end of the day, Chevy has walked away with two wins in the team’s first visit ever WTCC event in the USA. The results also show four Cruzen in the top six during the entire weekend.

Notable, the only American driver in the race was Robb Holland, who spent the year piloting British touring cars. He drove a Bamboo-engineered Cruze and finished the first race in thirteenth and the second race in sixteenth. His teammate, Alex MacDowall, came in fifth in the first event and seventh in the second.

Chevrolet, along with Seat, Ford, and BMW remain the centerpieces of the WTCC series. Unfortunately, the Bow Tie brand has gotten tired of winning and has elected to exit the event at the end of this season, with Honda due to fill their place. The Japanese automaker will field Civics in the final race of this season in preparation for a full-out effort next year.