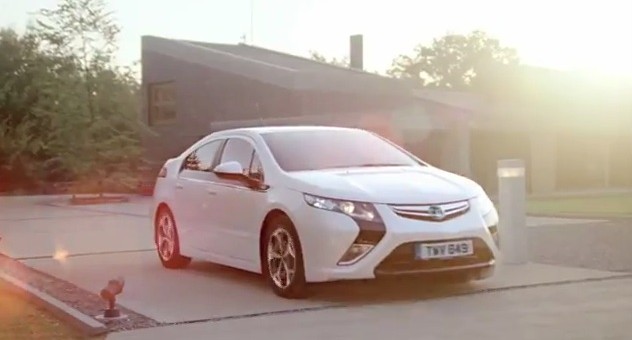 The UK Advertising Standards Authority (ASA), the sovereign state’s advertising watchdog, has banned a commercial for the Vauxhall Ampera (aka Chevy Volt) due to the ad’s supposedly-misleading nature.

The ad contains a brief instance of small-print that reads:
“Comparison based on electric vehicles and extended range electric vehicles driven electrically at all times, even when an additional power source is generating electricity”.

The ASA isn’t having it, and writes in its ruling:
“We considered that throughout the ad the emphasis was on the fact that the car was being driven electrically, and that most viewers would not understand that the car was in some circumstances being powered by electricity generated with a petrol engine. The ad promoted an innovative product which many viewers would not immediately understand and we therefore considered that it would need to explicitly state that the car had a petrol engine. Because it did not clearly explain how the vehicle worked in extended-range mode, we concluded that the ad was misleading.”

In other words, the agency believes that the average consumer is being fooled by the ad’s promise of a 360-mile range, which isn’t one of pure electricity, but rather one of a combined all-electric and engine-generator ranges.

We, however, find it ironic that the ASA — along with countless publications covering this development — chose to pursue GM and this particular Ampera ad while seemingly turning a blind eye to other automotive ads that promise a certain highway fuel economy. Most of those ads don’t openly state that the optimal fuel economy is only attained at a certain speed, ones that usually are much, much lower than the speed at which a regular driver will operate their vehicle on a freeway.

So if the ASA wants to protect Brits from an ad that could be misleading, it’s their right to do so; but why not take a gander at commercials from other automakers, as well? In any event, enjoy the ad while you can… lest it get pulled from the Internets as well.

Update 1: the ad is no longer available on Vauxhall’s YouTube channel. We’ve embedded it above using a non-official channel.