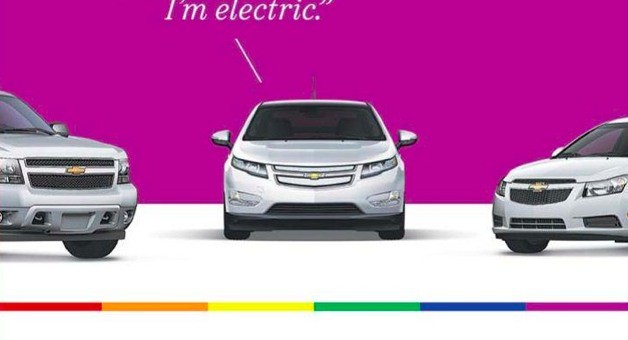 Last month, General Motors ran a gay-themed advertisement for the Chevy Volt in Detroit. With the trademark gay rainbow colors across the print ad, the text reads, “Whatever revs your engine, we support you 100%.” Adding some tongue-in-cheek flair is a caption above the Volt that proclaims, “Mom, Dad: I’m electric.” The ad was first published for $750 in the Motor City Pride edition of Between the Lines, a Michigan gay and lesbian newspaper. It then went on to be viewed 11 million times on social media channels.

“This was a good omen,” said Jan Stevenson, co-publisher of Between the Lines, in referring to the Volt ad. “They put their toe in the water, and it worked out really, really well. If anyone’s really paying attention to it, they would say, ‘Wow, this is an untapped market’.”

Gay and lesbian consumers prefer fuel-efficient cars and, unbeknownst to many, account for 5 percent of new car purchases; they also have an average household income in the six figures, which is higher than that of heterosexual households, according to a recent survey.

Automakers usually advertise to the gay community using niche methods, but the gradual acceptance of the community and the success of the Volt ad could signal more marketing is on the way — especially if the goal is to attract wealthy, educated, younger customers.

“The Volt ad “told us that this was something worth undertaking when the opportunities present themselves,” said GM spokesman Tom Henderson.

Perhaps more significant is the fact that the popularity of the Volt ad could signal a gradual return of gay-themed automotive advertising, something that was nearly abandoned since the 2009 financial crisis. Yet even if gay-focused advertising does make a comeback, customers still must purchase their vehicles at the final frontier — the dealer.

To the dismay of many, a recent Maritz Research survey found that nearly 8.3 percent of gay and lesbian car buyers were not satisfied with their experience at the car dealership, compared to 6 percent of heterosexual car buyers, signifying that advertising alone won’t lead to increased sales; instead, it’s about improving the entire sales process.

Did you see the Volt ad in question? If so, what did you think about it?