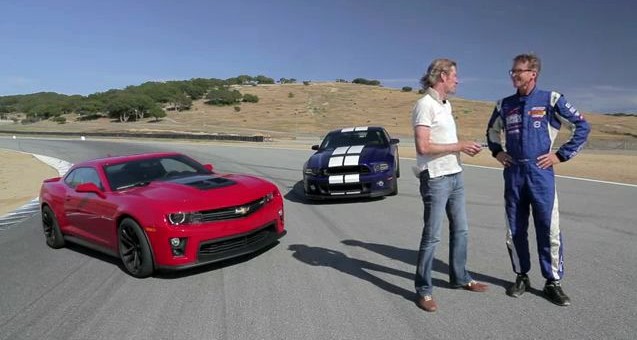 When looking at the new Chevrolet Camaro ZL1 on paper compared to the new Ford Mustang Shelby GT500, you might assume that the the Chevy wouldn’t have a snowball’s chance in hell of being able to go blow for blow against the Shelby, with it being under-powered by almost 100 horsepower according to the dyno chart. But as Goliath will tell you, brute strength isn’t everything. So, when taken to the street and track, how much of a performance advantage doth the Shelby posses? Motor Trend investigates.

As professional driver Randy Posbt flourishes through Leguna Seca in the ZL1, he notes the confidence-inspiring brake feel, and the sheer enjoyment of putting the power down at the end of a turn, and an impressive finish time of 1:39.2.

The Shelby did come in a tick quicker, at 1:38.7. Despite this, Pobst didn’t feel as comfortable with it, as he wasn’t a fan of the brakes, or lack of sophistication.

Motor Trend’s ruling: the ZL1 is just the more complete package than the GT500. Despite being slower than the Shelby in the test, the Camaro was still favored due to its superior suspension and brakes, while returning the consistency and stamina to go hard lap after lap, while the 662-horsepower Ford wore itself out.