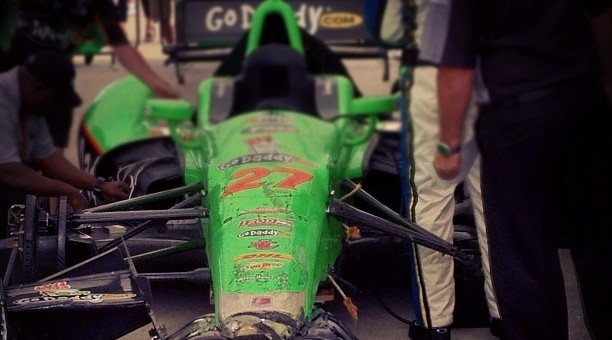 Early on, it seemed that Chevrolet would run away with the manufacturer’s points for the 2012 Izod IndyCar Series. But after today, it doesn’t seem the case at all, as a Honda-powered car not only won the 2012 Chevrolet Detroit Belle Isle Grand Prix, Honda straight up swept the podium, spoiling what was otherwise an amazing weekend for GM racing.

The race itself suffered a red flag setback, as Michigan road stereotypes even managed to infiltrate the race track. The race itself was delayed for almost exactly two hours due to 16 feet of weakened tar seam peeling away, causing a jagged, tired tearing line of concrete, which claimed James Hinchcliffe’s No. 7 GoDaddy.com Chevy (pictured above). A patch was put in place as quickly as possible, and racing resumed for fifteen laps, only for Scott Dixon to continue his lead and win the race by nearly a full two seconds. But due to the long delay, Belle Isle significantly emptied out, so there was almost nobody present to witness the push-back from Honda in Chevy’s home town.

With strong back-to-back wins at both last weekend’s Indianapolis 500 and today’s Belle Isle Grand Prix, it seems Honda has caught Chevy’s quick start in the 2012 IndyCar Series, and will be compelling to see if the Chevy teams will manage to bounce back before the Bowtie loses its points lead. After today, Chevrolet unofficially stands in first with 48 points, while Honda continues to close the gap with 41. Oh, and then there’s Lotus, with 24.

Meanwhile, Chevy driver Will Power also still holds the lead in driver’s points, unofficially, with 232 points. He stands ahead of Honda driver and today’s winner Scott Dixon, with 206 points. The next installment of the 2012 Izod IndyCar Series is the Firestone 550, June 9, at Texas Motor Speedway.