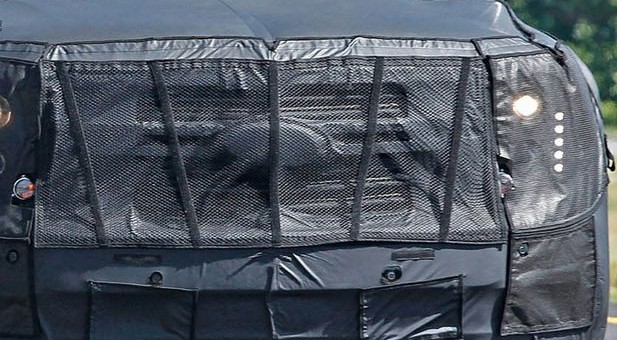 The 2014 Tahoe has been spied in full camouflage not far from GM’s proving grounds, with a Toyota Sequoia and Ford Expedition in close proximity. And for once, the Tahoe wasn’t towing two other vehicles into a nearby repair shop. But it’s clear that engineers are determining how their upcoming full-bodied SUV stacks up against rivals. And unlike the Ford and the Toyota, the new Chevy Tahoe (known as K2UC to insiders) and 2014 GMC Yukon (K2UG) are expected to keep their live axle setup rather than switching to an independent rear suspension, probably for the sake of towing prowess.

The full-size SUV segment has been dominated by GM for longer than most of us have been alive. And the automaker plans to keep it this way by combining new fuel efficient enhancements while retaining the rugged capabilities consumers have grown to love. Rumors of anything from an eight-speed automatic transmission to some sort of diesel engine finding their way into the powertrain setup have been speculated, but we’re definitely more likely to see the next-generation small-block V8 engine GM has in store for us over anything else. Displacement has been expected to remain the same as the current 5.3L and 6.2L offerings, but will receive direct injection this time around. There’s also a rumored 5.5L V8, but that could be for something else.

From what we can make out of the heavy camo, the Tahoe’s mirrors have become considerably sleeker, while LED lights accompany the front fascia along with front-mounted ultrasonic parking sensors — could those be for a self-parking system of sorts? We certainly hope so.

Speaking of the fascia, there appears to be an oval-like shape in the center of the grille, rather than a bowtie. We’ll assume this is some sort of trickeration by the dress-up crew; it almost had us fooled, if not for the typical GM number and tag marking locations on the windows and covered Chevy logos on the wheels.

GM has high expectations for this new generation of SUVs, and for good reason, as they’ve just spent $500 million (not a typo) on the Arlington, Texas plant in the past three years. The full-size pickups are to be updated first, followed by the SUVs. But as it stands, which would you rather have: Asia’s new TrailBlazer? The new Traverse? Or this new Tahoe?