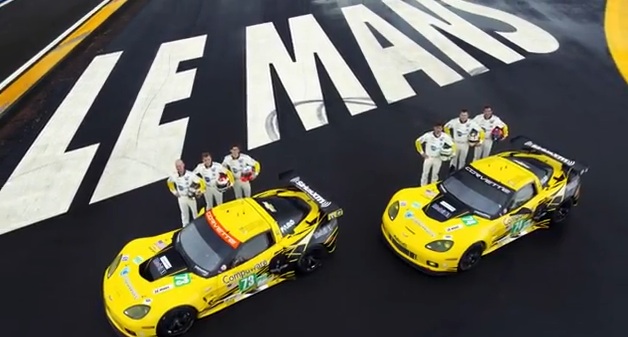 For the 12th time out of 13 attempts, Corvette Racing finished the 24 Hours of Le Mans, but perhaps this latest finish could have gone a bit better. Both the No. 73 and No. 74 Compuware Corvette C6.R race cars experienced nasty mechanical problems well into the race.

The No. 73 Corvette needed a new steering rack and faced number of electrical problems. With four hours remaining, the crew replaced the alternator and then made several battery replacements to overcome issues with the car’s charging system — spending far too much time in pit lane. After completing 326 laps, the car finished fifth in the GTE class at the hands of Jan Magnussen. The class-winning No. 51 AF Corsa Ferrari 458 Italia won the category by a three-lap margin with 336 completed laps. Undoubtedly, it was Ferrari’s race, as the 458 appeared thrice among the top four GTE finishers.

The No. 74 Corvette also saw its fair share of misfortune. First, it lost a wheel in the Dunlop Esses and needed to limp home for almost a full lap. The crew was able to repair the car in 9 minutes but lost 4 laps in doing so. Then, it encountered significant damage in a crash in the Porsche Curves in the 18th hour with Tommy Milner behind the wheel — costing the the car over two hours in the pits. After the crew virtually rebuilt the back half of the car’s chassis, they were with no hopes of advancing in the standings, and the car stayed in the garage until the final 40 minutes of the race. Oliver Gavin drove to the finish in his 12th performance at Le Mans, but since the car only completed 215 laps, the No. 74 was not classified because it did not complete the minimum race distance; nevertheless, it was sixth across the finish line of the world’s most demanding sports car race.

Following are quotes from members of the Corvette Racing team:

Doug Fehan, Corvette Racing Program Manager: “Sometimes in motorsports, the greatest battles that are waged are not against a competitor, but rather against the challenges that one faces. Today was one of those days for both the No. 73 and No. 74 Corvettes. When we got to the 12-hour mark, it became clear that it would be difficult to leave Le Mans with a victory. At that point we engaged the enemy head on, which was adversity. I think by any measure, anyone who watched this event saw us emerge victorious against that enemy as we brought both cars home once again to a finish in one of the most brutal, hard-fought battles in our Le Mans history. I think we can all be proud of the passion, the dedication, and that never-say-die attitude of Corvette Racing. Hopefully, our fans enjoyed every minute of it.”

Antonio Garcia, No. 73 Compuware Corvette C6.R: “All I could do was push, push, push, but in the end it’s not down to us whether we finish on the podium or not. It’s a shame, of course, because the car was really good throughout the race, except for the problems with the steering rack and the alternator. Some years ago you could maybe still hope to make up a five-lap deficit over 12 hours, but nowadays the competition is so tough that the slightest problem puts you out of contention. We’ll have to come back next year for some suitable revenge.”

Jan Magnussen, No. 73 Compuware Corvette C6.R: “The car was fantastic, very fast and very consistent. My double stint in the morning was the best double I had in the entire race. It’s a shame we lost some time by changing the alternator. Other than that I’m feeling fine when I’m in the car as the adrenaline takes over and I then don’t suffer from my cold and fever.”

Jordan Taylor, No. 73 Compuware Corvette C6.R: “It was great to race at Le Mans, every stint I’ve done has been better and better. It was a relief to get through those stints safely, without any mistakes and keeping the car on the track. That’s the name of the game here. We didn’t make any mistakes, although we did have mechanical problems. It was just beginning to get light when I started, and it was really cool to go through the Porsche Curves at sunrise and then down the Esses at Dunlop, to remember the footage and photos from the old days and to think that I was in the same position as those cars. I’m glad I got to do that kind of stint and feel the history while I was driving.”

Doug Louth, Engineering Director: “We had the drivers, cars, and team to compete for a win this weekend. It was a pleasant surprise to find our lead increasing at night as the cool conditions are the most challenging for us. It’s unfortunate we weren’t able to leverage our warm weather performance on Sunday afternoon – we expected to gain performance as the temperature increased and for our competitors to drop off. What we ended up with is a fresh reminder of the scope of the undertaking that is the 24 Hours of Le Mans. There are so many details, checklists, and tasks that go into running the perfect 24-hour race. We missed a few of these today and had some bad luck along the way, but we have our 13th Le Mans 24 behind us, and we’re already looking to 2013.”