When we first visited the 2011 Cadillac SRX last year, our feelings were mixed. The interior was sexy, and the panoramic moonroof was an awesome touch, but the 2.8L turbocharged V6 engine was more of a disappointment than anything else. So here we are with the 2012 model — and at first glance, it seems exactly the same.

Aside from the addition of a heated steering wheel to the Luxury package and upwards, there’s not really a whole lot new for the 2012 model year Cadillac SRX, so we won’t go into detail discussing what can already be found in our review of the 2011 Cadillac SRX Turbo. We’re here today to share with you one new, very important element that you can’t initially see: the powertrain. 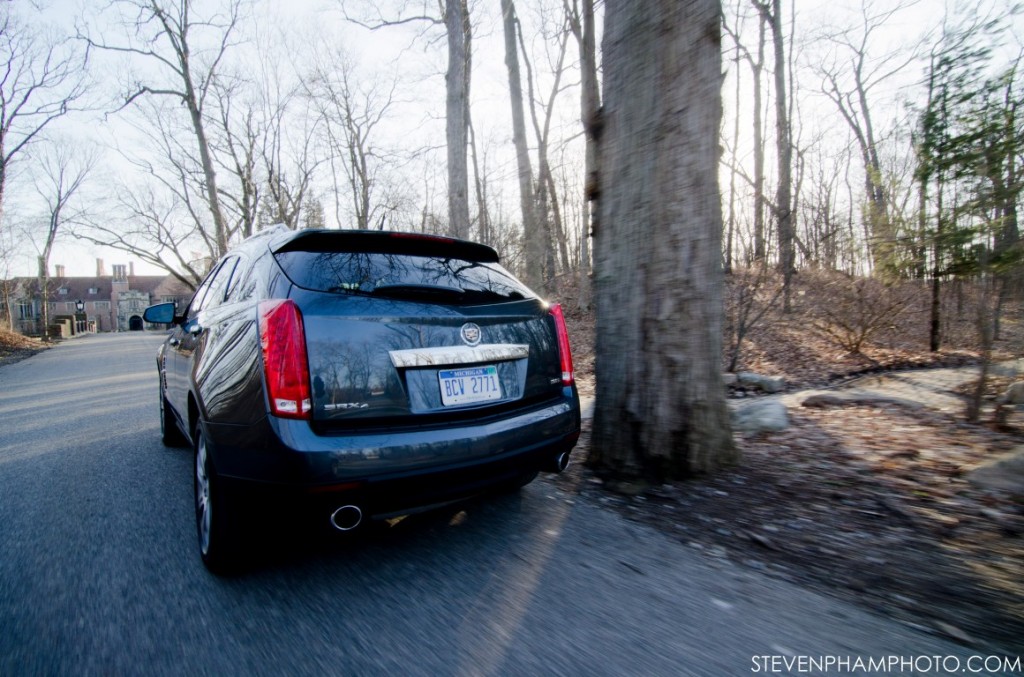 The turbocharged 2.8L V6 engine that was cradled in the 2011 SRX was good for a sufficient 300 hp and 295 pounds-feet of torque, which was a significant boost from the base 3.0L V6 LF1 engine that pushed out a more docile 265 horsepower and 223 pounds-feet. The 2.8L turbo provided decent horsepower and torque numbers, but its V8 SUV-like fuel economy numbers were a huge turn-off; no wonder over 90 percent of all SRX buyers chose the 3.0L, which itself is fairly crude and underwhelming. So Cadillac tasked the 3.6L V6 LFX engine to replace both the 3.0L and 2.8L turbo engines in the SRX, thereby killing two engines with one. It’s a welcome move, because both the 3.0L V6 and turbocharged 2.8L V6 pale in comparison to the 3.6L LFX.

By doing so, the popular luxury crossover brings 308 horsepower at a howling 6,800 RPM and 265 lb-ft of torque at a more ready 2,400 RPM to either the front or all of wheels. That horsepower number is class-leading, while the fuel economy — 17 mpg city and 24 highway — is much better than the inefficient 2.8L turbo; and it’s just 1 mpg below what the 3.0L delivered, with the power increase making it all worth it. In the case of the SRX 3.6 with all-wheel-drive, fuel economy numbers happen to be 16 mpg in the city and 23 in the highway, with a curb weight of 4,442 pounds, almost 500 pounds lighter than the BMW X5 35i, which features very similar dimensions and power. As usual, we averaged a little better than the EPA-rated average, tallying 19.6 mpg. Speaking of weight, the SRX 3.6 is the second-lightest midsized crossover on the market, just behind the Lexus RX350, which comes in at a lighter 4,178 pounds. But the Lexus only brings 270 horses to the table, and the driving dynamics are much less appealing than those of the Cadillac.

The inclusion of the 3.6L V6 LFX engine bumps the price of the 2012 Cadillac SRX to$36,060, up slightly from the $34,430 base price of the 2011 model. Upgrade to the 2012 SRX Premium, and add a $1,395 Rear Seat Entertainment system, and it lands at our tester’s price of $51,055 — which is actually a couple grand under where our 2011 SRX Turbo tester landed. An 8-inch pop-up touch navigation screen, 20-inch wheels, keyless access, illuminated foot wells, Bose surround sound system — the whole nine yards can be found in the SRX. It’s also an IIHS top safety pick. 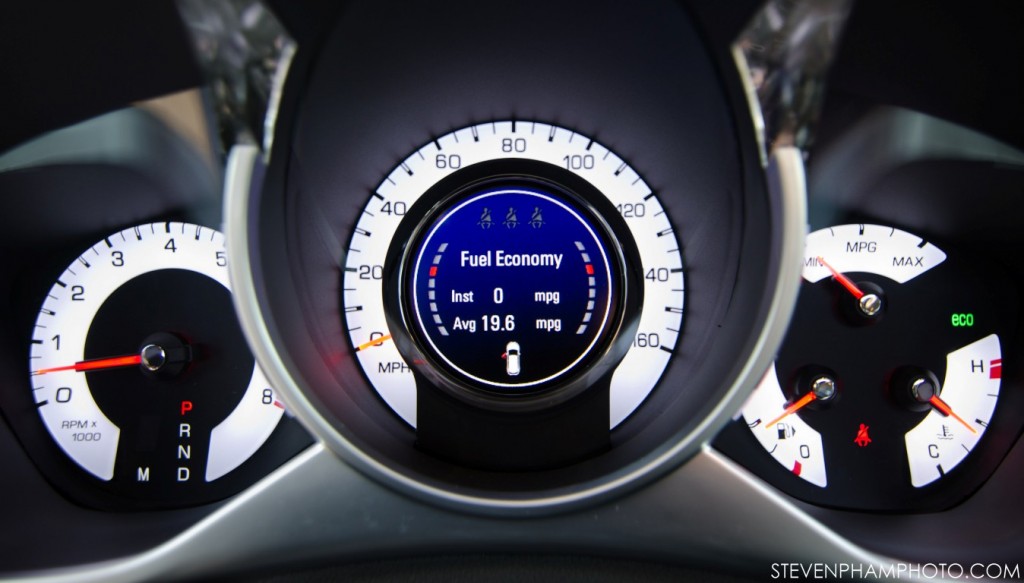 6.2 seconds is the acceleration time from 0-60 mph in the AWD SRX 3.6, which is actually faster than the X5, believe it or not. Leaving the pedal down yields what has to be the best-sounding V6 exhaust note in a crossover; matched by a taught, new-for-2012 variable real-time damping suspension system and a solid steering feel revised for 2012, making the SRX 3.6 an unassuming performance-oriented crossover. Even if it is the front-wheel-drive-based Theta (or Theta Premium) architecture.

Better still is the all-wheel-drive system with an electronic limited slip differential and torque vectoring control, which provides exceptional confidence in nearly any weather condition. But switch the SRX 3.6 to Eco mode, and the vehicle relaxes a bit, with a little less power delivery and a shifting pattern from the six-speed automatic transmission designed to optimize fuel economy. Plenty of drivers may enjoy this driving style — which without a doubt increases the vehicle’s everyday appeal. And if that doesn’t, the fortified SRX’s cabin quietness definitely will.

Looking ahead to the 2013 SRX, the crossover will continue with the 3.6L V6, and will sweeten the deal by adding the much-hyped CUE infotainment system, along with a revised front grille and a newer, hopefully much better steering wheel. 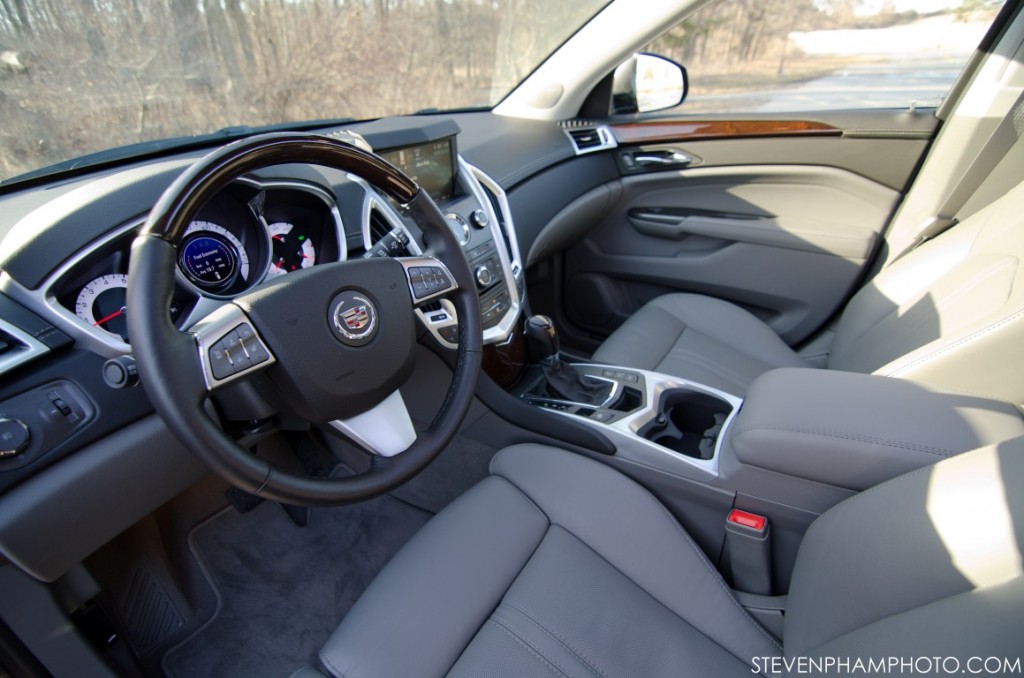 The 3.6L V6 LFX engine should have been in the current generation SRX from the get-go. What an improvement this engine makes.