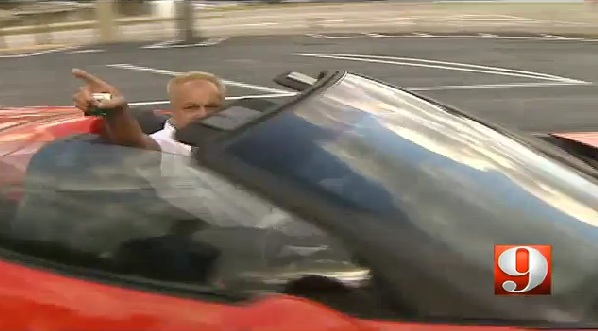 Imagine you’re on your way to a week-long cruise with your significant other. The two of you are looking forward to a careless seven days of freedom on the sea; and while you’re enjoying the festivities on and off the ship, you also hope for the same for your car — which you left at a private parking lot near the port from where your cruise ship is sailing. Only while you’re enjoying the sun, the food, and cheer, your car may be at the hands of a careless moron.

That’s what WFTV found out after an undercover investigation of a private lot near Port Canaveral, FL. that offers to watch your ride and drive you to the port in a limo. To prove the practice, WFTV proceeded to rent a Torch Red 2012 Corvette and install a GPS tracking device. The news outlet then sent a husband and wife in the car on their way to a “vacation”. Not six hours after leaving the Vette at the lot, Primer Parking Spot owner Jay Nieves got behind the wheel — and was off to the races.

The station captured Nieves and another employee joyriding in the car, peeling out in dirt roads (really?), cruising down Merritt Island, and parking at a local Applebee’s (classy!). The lot owner even tried to execute several tail slides and burnouts, parked the car at his home overnight, then drove it all over town running all kinds or errands; he even went to Ace Hardware and proceeded to load up the performance car with lumber. Nieves even let his dog walk all over the car; the spree came to an end when Nieves left the Vette in a parking lot near his own lot with the top down and the driver-side door open for more than 20 minutes.

When confronted, the business owner denied any and all involvement, saying “You’re completely wrong.” How the 61 miles added themselves to the odometer are still a mystery… but we’re left wondering if Nieves would even make an effort to clean and gas up the cars prior to the owners returning from their vacation.

Let this be a lesson to all villainous car-sitters. Because journalists will go to great lengths to extort you for a story.

And did you notice how we went this entire time without making so much as a mention of Ferris Bueller?