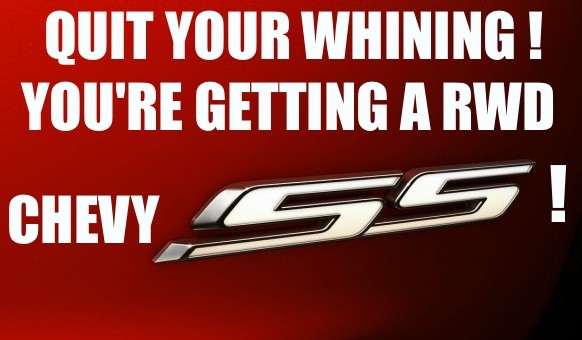 Sure, the Chevy SS Performance Sedan may not have been General Motors’ best-kept secret. But now that the rear-wheel drive, Zeta-based performance sedan is definitely on its way — albeit in limited production form — enthusiasts should be content, perhaps even elated… right? So one would think. But they’re not.

Shortly after GM’s official confirmation of the forthcoming vehicle, automotive aficionados all over the web exemplified qualities that perhaps demonstrate most clearly why it so difficult to assuage the car enthusiast: fans began asking (perhaps even whining) for more. Some paraphrased grousing included, “this thing better have some updated styling… if it’s just a Commodore it ain’t gonna cut it for me.” “The interior is too bland; they better update it if they want my hard-earned cash.” “Magnetic Ride Control and all-wheel drive better be an option. And it better offer wood trim on the inside, too. And 450 horsepower should be standard.”

Perhaps those are slight exaggerations for what should really be expected. But the fact remains that car guys aren’t happy that a sporty rear-wheel drive sedan — the first from Chevy in over 15 years — will finally be available for purchase in North America. No, not only do they want the bells and the whistles, but that carrot better be on top as well — or else they’re going to take their business “elsewhere”.

Earnestly, folks — what’s all the bitching about? We don’t even know so much as the engine choices of this vehicle; can’t we just savor the fact that a few people at The General actually had the intuition and fortitude to actually green light such a niche project, knowing full well that the car will move as many units as perhaps the Camaro or Corvette?

Still, that’s not to say that we shouldn’t want and demand certain features, hope for more power, more precise handling, or a better overall driving experience. But let’s remain realistic while doing so, shall we? Because the situation could be much worse.