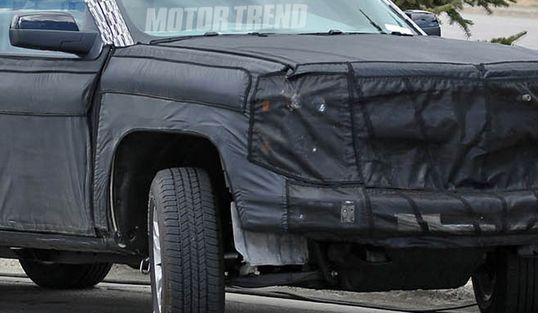 General Motors has been hard at work developing and testing the 2014 Chevrolet Silverado under heavy camouflage for about a year or so now, but it hasn’t been until the past few months where spy photographers were able to capture the all-new truck pacing itself in and around GM’s Milford Proving Grounds. And with photos published on Motor Trend, we now have our best looks to-date.

Spy photographers also captured a bonus: a 2500 HD model, which was easily identified by its eight-lug nut wheels. Still, the new GMC Sierra still seems absent from the party.

Compared to the GMT900 model, the front fascia of the new “K2xx” Silverado 1500 appears larger and more pronounced, as the hood flows forward almost completely flat before vertically cutting where it meets the headlamps. Meanwhile, the rest of the body appears leaner and more streamlined. Notably, the twin-port grille look seems to be staying on the Chevy trucks, while the rest of the brand lineup seems to be going a different route. They must not have gotten the memo on the design change soon enough.

As far as powerplants go, we’re expecting an EcoBoost-fighting V6 somewhere in there, along with the next-generation of small-block engines and even an eight-speed transmission.

We’re expecting the new Chevy half tons to begin assembly in one year’s time, while the HD variants will follow suit come fall 2013.

What are you hoping to see from Chevy’s new breadwinner? Sound off in the comment section below!