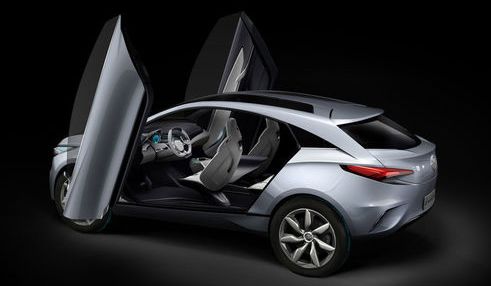 General Motors is researching the use of scissor-style doors that are commonly found on exotic sports cars such as those offered by Lamborghini, GM Authority has learned. The exploration comes as a result of a “wild suggestion by a design team to outclass the competition” in styling, according to sources.

Sources say that there currently are no concrete plans to implement the doors on production vehicles, but the automaker has conducted a feasibility study and has determined that it would be “slightly more expensive” to put the doors into a production vehicle, if the plans ever called for it. The additional manufacturing expense was described as not being prohibitive to bring a vehicle with scissor doors to market.

Recall that the the Buick Envision concept (pictured here) featured scissor-style doors that, when opened, revealed the entire side of the cabin.

Another idea within GM is to give the doors power, which would allow for hands-free opening and closing. Doing so would be much more costly and would most likely “prevent the doors from ever seeing light in a production car”.

Besides the obvious drool factor, scissor doors offer several advantages over traditional doors, such as being more useful in tight parking spaces since the doors usually stay within the car’s track throughout their movement. But the one obvious advantage quickly fades when one considers the fact that scissor doors limit emergency egress during a rollover. In addition, the doors may not be useful in roofed parking structures, where the height of the parking lot may result in the door hitting the structure’s ceiling, thereby preventing the door from opening fully.

But forget all that — we all know what GM’s real reason is for looking into these trick doors: the undeniable coolness factor.