While its not as big of a cash cow as the behemoth Escalade, Cadillac has heavily relied on its SRX crossover as a breadwinner for the brand. The sales numbers speak for themselves, and since the current generation model entered the market, it’s been a huge hit. Things only got better when both the mediocre 3.0-liter LF1 V6 along with the inefficient and unpopular 2.8T V6 were discarded in favor of a more lively 308-horse 3.6L V6 for 2012, and now the deal is only getting sweeter for the 2013 model year.

Changes are kept to a minimum on the exterior, with Cadillac taking care as to not ruin the attractive sheetmetal. The most noticeable change however is the front grille, with the grid lines getting a little more detailed than what we see on the 2012 model year. There’s also LED accents around the chromed fender vents — which already happen to be fake, by the way. Additionally, both the Performance and Premium trim levels get new 20-inch wheel designs, and a trio of new metallic paint colors are added to the SRX’s palette: Evolution Green, Glacier Blue, and Silver Coast.

Inside the cabin, the CUE infotainment system will be found, and it will be standard. The system is operated via an eight-inch LCD touch screen embedded in the center stack — no more pop-up navigation screen. There’s also fewer buttons in the new layout, as capacitive-touch controls replace where the knobs otherwise used to be. The screen also flips up to cleverly store a smart phone or MP3 player, which can be plugged in via a USB port in the same compartment. There’s also another pair of USB ports in the center console, along with an SD-card slot and an audio input jack. 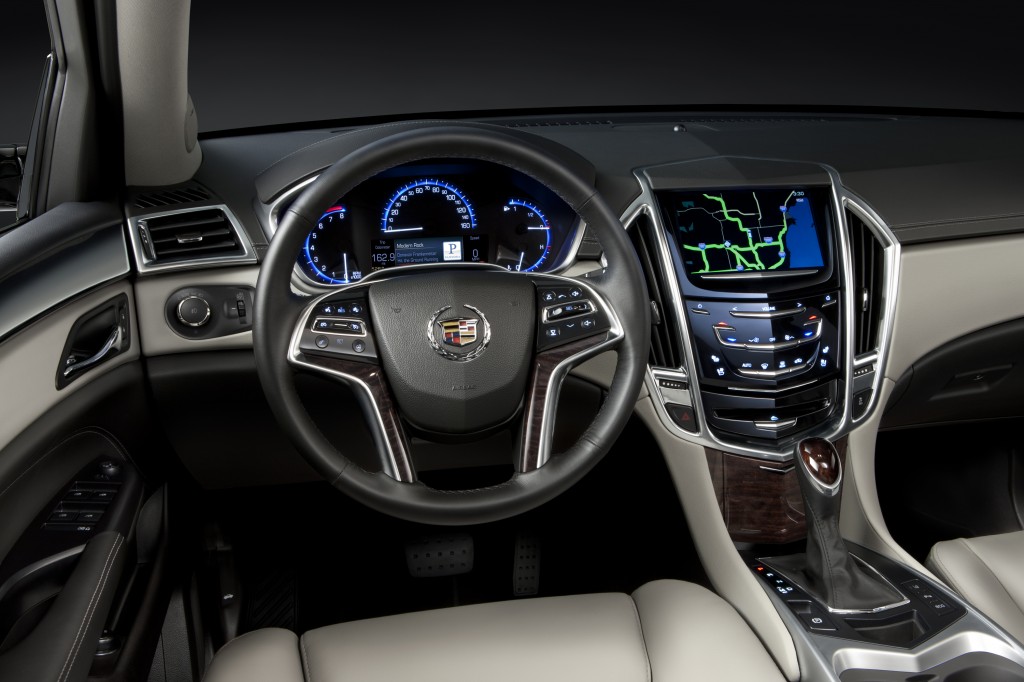 For the driver, the new Cadillac steering wheel is present, as is a completely digital instrument panel. Modern, yes, but we’re still going to miss the layered looks of the outgoing setup. There’s also a CUE-integrated driver information screen located below the speedometer. Audio-based active noise-cancellation technology is now standard.

Lastly, several new active safety features make their way into the 2013 SRX. These include adaptive cruise control, front and rear automatic braking, and Cadillac’s new vibrating Safety Seat, which are all bundled into the available Driver Assist package. Spring for the Driver Awareness package, and Collision alert, lane-departure warning, the Safety Seat, and a rearview camera with dynamic guidelines become present. These packages won’t be available on the base SRX, but blind-spot monitoring and rear cross-traffic alert systems are standard.