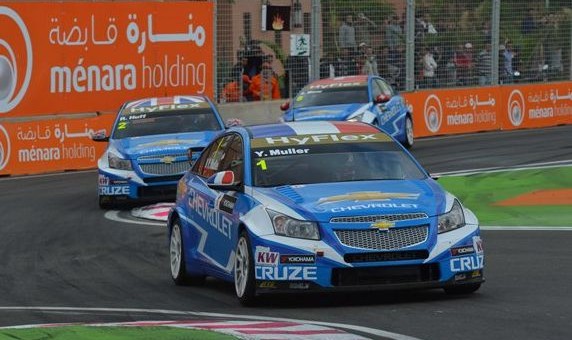 On top of Corvette Racing winning at Long Beach, a Chevy engine winning IndyCar, and Cadillac Racing taking the checkered flag in its race, the Chevy Cruze WTCC team saw the same kind of success over the weekend after their race in Morocco. But it wasn’t just a win, it was a sweep, and the most successful weekend in Chevrolet WTCC history. Considering the kind of annihilation the team has dished on the rest of the field for the past couple of seasons, that’s saying a lot.

For either race, a Chevy Cruze did not finish any worse than third place. For the first race, the win went to Alain Menu, with Rob Huff coming in second and Yvan Muller taking third. For race two, Menu and Muller switched positions, probably for fun, while Huff held his second place spot.

After Morocco, Muller leads the driver standings with 130 points, with Menu in second at 105 points, and Huff in third with 97. In manufacturer standings, Team Chevy is already 107 points ahead of BMW with 268 points. The next event for the team will be the Race of Slovakia, Slovakiaring, on the 26-28 April.

The team should consider maybe sitting a race or two out, just to give the competition a slim chance of coming close.