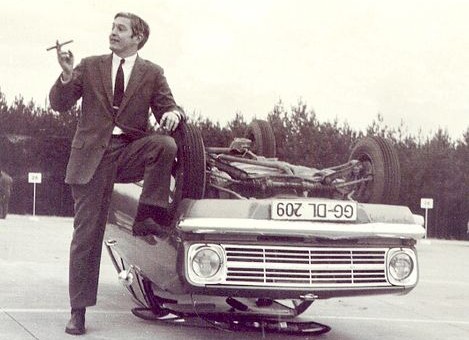 “To liberate the United States from the immense costs of this role and the destructive effects of oil price volatility, the nation requires an oil security policy that, over the long term, decouples our transportation sector from the global oil market. The costs — in both blood and treasure to the United States — are too high not to act.”

That’s what Bob Lutz wrote in his second stanza for his latest article published in Forbes, in between push-up contests with television hosts. It gets better:

“Economically, Americans are suffering as a result of high and volatile oil prices. Income tax cuts under President Bush — totaling $1,900 for the average American family between 2001 and 2008 — were more than offset by a $2,000 increase in spending on gasoline during the period. The same occurred in 2011, as the $108 billion payroll tax cut under President Obama was essentially wiped out because spending on gasoline increased by more than $104 billion. Americans received tax cuts to stimulate the economy, but the money was put into one pocket and then taken from another to pay for higher gas prices. Any wonder why our economic recovery has been so sluggish?”

And yet, the United States continues to exhaust its efforts and finances in “protecting” the world’s oil supplies, of which the price is mostly controlled and manipulated by OPEC, according to Lutz. The effort is asinine, considering the nation’s dependence on oil can be drastically slashed, by simply putting more and more effort into electric vehicles.

“The beauty of plug-in hybrids and pure electric vehicles likes the Chevy Volt and the Nissan Leaf is that they are powered by electricity, which can be generated from many sources: nuclear, coal, and natural gas…These are all domestic energy sources, meaning OPEC won’t be able to corner the market. And the retail price of electricity is far less volatile than the price of oil.”

It may have been puzzling to some far-left or far-right politically-minded individuals that Bob Lutz, the man that said “global warming is a crock of sh*t” back in 2008, has been tirelessly advocating the Chevy Volt, while being an advisory member of Via Motors, which builds all-electric pickups and SUV models from GM vehicles. But regardless which side you’re on — or if you would rather not pick between a flawed “two-party system” — Maximum Bob has a point. Sending $326 billion overseas in 2011 to import more oil didn’t help the public or the financial health of America.

Lutz addresses that only way to fundamentally solve this vicious cycle is to break the transportation sector’s dependence on dinosaur juice, which he claims accounts for 70 percent of the total oil consumed by the United States, and 94 percent of the sector needs oil for its source of fuel. Sure, Americans could utilize more domestic drilling, but that will hardly make a dent in today’s $4 a gallon gas prices. It has to be something completely different. And while electric vehicles are a start, alternative energy options such as CNG/LPG-powered heavy-duty trucks and more electrification of lighter vehicles are deemed the most promising.