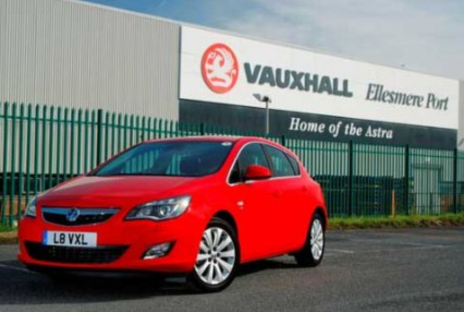 General Motors is expected to make a decision to continue operating or shutter its Ellesmere Port factory in the U.K. by the end of the month, GM Authority has learned. The company is actively designing a plan to curb losses in Europe — which lost $700 million in 2011 — and shutting down a factory, or two, is one of the ways to sharply cut expenses. So while things may be on the up-and-up for The General overall, the outlook may not be as cheerful in England.

Ellesmere Port is located on the southern end of the Wirral peninsula. The plant currently produces the Opel and Vauxhal Astra and is GM’s last United Kingdom’s last car plant, although a plant in Luton — which makes Opel and Vauxhal Vivaro vans — is believed to be safe for now.

For the last several months, Ellesmere’s 2,800 workers have been looking forward to celebrating the plant’s 50th birthday in November. The facility churns out 47 Astras every hour and is described by GM as “one of the most productive and efficient in Europe”. It once employed 12,000 workers, but thanks to developments in manufacturing automation and flexibility, General Motors is capable of building the Astra line in other parts of its European operations, including Russelheim and Bochum (Germany) as well as Gliwice (Poland). The facility is built on the site of a WWII airfield called Hooton Park. It originally supplied components for Vauxhall’s factories in Luton and Dunstable and started to produce cars in 1963, the first of which was the HA Vauxhall Viva. It cost a mere £436 ($693) or £468 ($744) for the “Deluxe” model, and was positioned as a direct competitor to the Morris Minor and the Austin A35. About 10,000 were made a month. The plant’s later models consisted of the Chevette, Astra, and Vectra.

Earlier this month, U.K. business secretary Vince Cable made a trip to New York to hold a meeting with GM CEO Dan Akerson and Vice Chairman Steven Girsky in which he reportedly demonstrated the benefits of not only keeping, but also investing in Ellesmere and the country’s automotive manufacturing operations.

But nothing tells the story of Ellesmere Port better than the name of the local soccer (or is it football?) team, which proudly wears the Vauxhall Motors name. The Conference North league team is well known by their nickname Motormen.

Unfortunately for the Motormen, Mr. Cable, and the 2,800 Ellesmere workers, the tide seems to be set against them — as the real problem with GM’s European operations is a glut of capacity designed for unsustainably high sales levels. With most government-backed car-buying incentive over (such as the U.K.’s version of the Cash for Clunkers program), auto makers are left with a depressed market that has resulted in a 4.4 percent drop in sales last year — the lowest level since 1994. In effect, many customers who were going to buy a new vehicle pushed forward their decision to do so during the scrappage schemes and have purchased already.

At this point, it should only be a matter of weeks until the world discovers the fate of Ellesmere Port. But GM should be careful not to strip away too much capacity so as not to limit its ability to satisfy demand of a healthy market and a strong economy. In essence, the market will come back sometime in the future — and when it does, The General may have to resort to importing vehicles from China and Korea to satisfy European demand. And that may not be such a good idea.