Remember when we told you that the Chevy Camaro Z28 is still coming? Well, this isn’t it. However, the upcoming Chevy Camaro 1LE Performance Track Package for the 2013 model year could might as well be. With both visual and mechanical upgrades, this red devil will try and bridge the gap between the 426-horse Camaro SS and the 580-horse Camaro ZL1. It will be priced between the SS and the ZL1 as well, with plans to start at under $40,000 when it launches later this year.

Yes. 1G cornering abilities and 426 horsepower for under $40,000. And because the 1LE package is track-oriented, Chevrolet is pursuing SCCA approval of the 1LE package for Touring Class competition in anticipation of buyers entering the 1LE in amateur-racing events.

The photos themselves do a lot of the talking, with black accents complementing the otherwise red (or yellow) body finished off by red Brembo calipers. But perhaps the biggest, most welcome changes include the optional 7-inch touchscreen found in the interior, complete with a backup camera, GPS and Chevy MyLink. 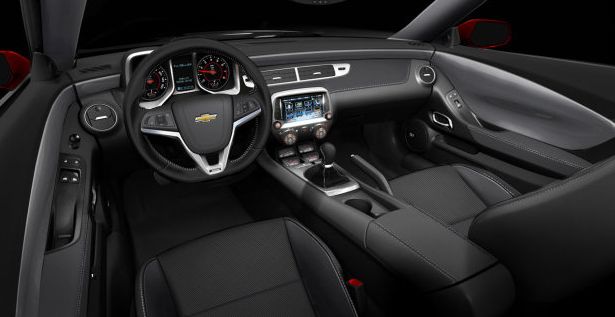 Gone are the Pirelli tires found on the SS, and in their place is a set of stickier Goodyear Eagle F1 Supercar Generation 2 (G:2) front and rear tires, the same as on the ZL1. As a result of having such grippy tires, the half shafts of 1LE have been strengthened to handle the increased grip and handling of the 1LE’s rear rubber. A strut tower brace has been added as well to enhance cornering and balance, as have front (27mm solid) and rear (28mm solid) stabilizer bars.

Perhaps there will be more to come at the 2012 New York International Auto Show in the coming days. And will it be better than a Ford Mustang Boss 302/302 Leguna Seca? We’d love to find out.