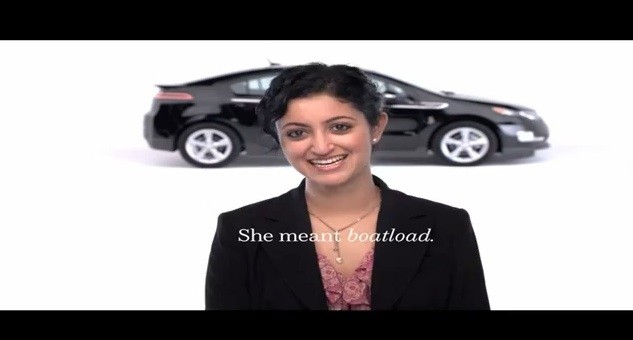 Behold the first two ads of Chevy’s newest ad campaign for the Chevy Volt. The two spots, first publicized by GM CEO Dan Akerson as featuring “the facts” and being “more interesting”, feature Volt owners Priya and Adam and labels them as “the happiest drivers on the planet”.

Adam touts the fact that he thinks about the future and cares about his car “because it’s a cool car” that’s “stylish and makes a statement at the same time”. Adam’s segment also touches on the fact that the public at large may not be familiar with the way in which the Volt works, and then goes on to explain that “when the battery runs down, the gas engine operates.” Thus, Adam never worries “about running out of battery power because it just switches over to [the] gas engine”. Adam concludes by stating, “I very rarely put gas in my Chevy Volt” and “I love the Chevy Volt… and I’ve never loved a car.”

Meanwhile, Priya’s spot touts the Volt’s uniqueness, exterior and interior styling, and — more than anything — the gas mileage. “I don’t really know what it’s like to stop and get gas. I am going to the gas station once a month, probably less.” Priya concludes with this closer: “You should get a Volt because it’s gonna save you a crapload of money.” Yes, crapload.

As both Adam and Priya discuss their love for the car, small subtitles complement their narration. For instance, when Priya blurts out “crapload”, the subtitle is quick to point out that “she meant boatload”.

Well, these are definitely interesting and more informative — as Mr. Akerson had promised, although we find it interesting that the Volt takes a backseat in the ads while the narrators soak up the spotlight. But is it just us or do the subtitles seems to be mocking the narrators in a way?

At the end of the day, it remains to be seen if these two ads will educate the public about the Volt and its benefits, and whether they will improve Volt sales, image, and public perception while increasing interest in the car. We, as always, remain hopeful.