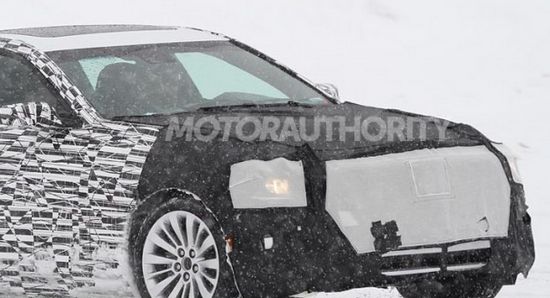 You’re probably wondering where the major refresh is for today’s long-in-tooth Cadillac CTS. Having been around since 2007, the current generation CTS has seen virtually no major updates, though it eventually came in three body styles, along with a V model to go with each. Despite the variety, current CTS has been criticized as a tweener car, straddling the line between the compact and midsized luxury car segments. This new CTS looks to take the battle exclusively to the mid-sized front, and it seems to be less than two years away.

From what we gather, the 2014 Cadillac CTS will be significantly longer than today’s model, and will share the flexible Alpha platform with the upcoming ATS. And though the new Caddy is almost completely masked, we can tell that the entire exoskeleton has been totally revised, though the brand’s design language is still present. However, the interior is shrouded in mystery. Judging by the interior of the new ATS, we’re expecting the refinement and quality of the interior of this new BMW 5-Series-fighter to absolutely shame the outgoing CTS.

We don’t have any hard evidence on the powertrain information just yet, but if you consider the 240 hp, 300 hp and 400 hp offerings of the today’s BMW 5-Series, it paints a pretty clear picture of what we can expect from the new CTS. For instance, it’s not difficult to imagine a 270 horsepower turbocharged 2.0L engine as the base, or a 318 hp 3.6L LFX V6 in the middle. As for what’s the next step up, it could be a new twin-turboed V6, or an implementation of GM’s next-generation small-block V8 engine. Don’t count out a hybrid, either.

Lastly, expect the new CTS to be significantly more expensive than the tweener of today. Somewhere between $40,000 and $45,000 sounds about right, when considering the asking prices from the offerings found at BMW, Mercedes, Audi and Lexus. For more spy shots, visit Motor Authority.