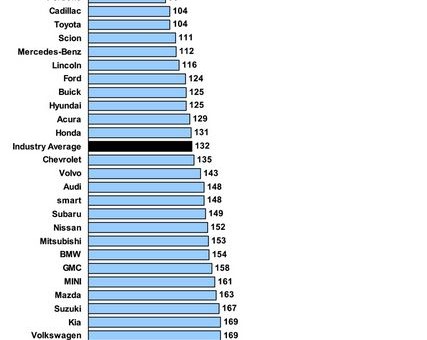 Last year, both Cadillac and Buick cracked the Top 10 in the 2011 J.D. Power U.S. Vehicle Dependability Study. Buick came in 7th, finishing behind rivals such as Acura (6th), Lexus (2nd) and Lincoln (1st). Cadillac finished 9th, just behind Mercedes-Benz. Chevrolet and GMC found themselves below the industry average last year, with Toyota (5th), Hyundai (10th), Honda (11th) and Ford (12th), finishing well ahead of them.

Fast forward to the 2012 results, and things are a little different. Cadillac ties for third place with Toyota with 104 “problems” per 100 vehicles, behind Porsche (2nd) and Lexus (1st), but ahead of Mercedes-Benz (6th). Buick finds itself in 9th place, behind Lincoln (7th) but ahead of Acura (11th). So while Buick slipped slightly, Cadillac found itself upping its quality game. Unfortunately for Chevy and GMC, they again fell below the industry average. Chevy finished 13th, behind Toyota, Ford and Honda. GMC found itself at the bottom of GM’s rankings, but well ahead of Ram, Jeep, Dodge and Chrysler, which came in the last four spots.

These rankings might be brag-worthy for some automakers, but considering how much they change every year, can they really be dependable? How do you feel about the J.D. Power rankings?