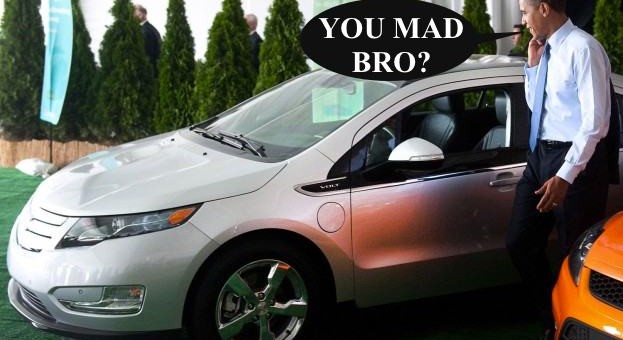 In a recent viral email floating around, it tells us that President Obama (if this gives you an immediate clue as to what’s about to follow) wants us to pay 3 times as much for a car that costs more than 7 times as much to run and 3 times as long to drive across the country. As it turns out, Snopes, an urban legend debunking site got a hold of the email, and decided to do some logical, rational math. Such qualities are fading in the world, but thankfully Snopes is here to help.

The website points out that the email bases its story off of a questionable review of the Chevy Volt by Fox News’ Eric Bolling. Bolling claimed that the car took 12 hours to charge, and around 25 miles before the battery’s energy was depleted. For some reason or another, Bolling and friends thought the car was useless afterwards. As any sane person knows, the Volt has a gasoline engine to keep the battery at a certain level of power to propel the wheels, and can be filled up with gasoline just like any conventional car. And charging times can be slashed down to just 4 hours with a charging station.

Now, whoever wrote the email also sucked at math (and grammar). Assuming the range of the Volt is 270 miles like the email did (it’s not), and driving at a rate of speed of 60 mph, it would take 4.5 hours to reach that distance. The email then goes on to tack on another 10 hours of charging time, making the total trip time to 14.5 hours. As we smack our heads in disbelief, it’s important to point out that you don’t ever need to charge a Volt if you chose not to. Ever.

Snopes also breaks down the operating costs per mile, putting the Volt’s charging rate at $1.70 a night (which is actually a high number), working out to a mere $.07 a mile while in electric mode. And with the Volt’s 35 mpg average and assuming gasoline is $3.56 per gallon, driving it with the engine running would be $.11 a mile. We’re pretty sure that beat’s the operating costs of a V8 pickup truck.

What is happening here is reckless ignorance and unwarranted defamation of the Chevy Volt, all of which is done by bigots of a certain political party. Readers of GM Authority, we urge you to properly inform your respective circles that the Chevy Volt is just fine.