When General Motors introduced the GMC Acadia back in 2007, it was not only the first crossover offering from big red, but it was also the first three-row crossover on the market — offering room for up to eight and returning 24 highway miles per gallon. Needless to say, the crossover has been a hit. However, the crossover hasn’t seen any major updates since its introduction, and has begun to show its age in many ways. What we see here today looks to change that.

With the reveal of the 2013 GMC Acadia comes a fresh new exterior, new tech, and new safety, while retaining the elements that helped garner the vehicle’s popularity. Consumers will still be able to find seven- and eight-passenger seating, the capacity to hold products 48 inches wide (drywall, anyone?) while offering new features and innovations.

From a design standpoint, the 2013 Acadia brings a more muscular face to the table, with a three-bar grille present and accounted for — a design element that has become commonplace in the GMC family. Additionally, we see a ton of resemblance in this new face to that of the GMC Granite concept revealed a few years ago in Detroit. However, the rear tail lamps appear to be ripped straight off the bygone Saturn Outlook, but it doesn’t seem to be all that bad of a thing.

Overall, the stance of the Lambda-based crossover sits a little more upright, with LED running lamps being standard on all trim levels. The rear glass also wraps around a bit more, and new 18 and 19-inch wheel designs enhance the stance. 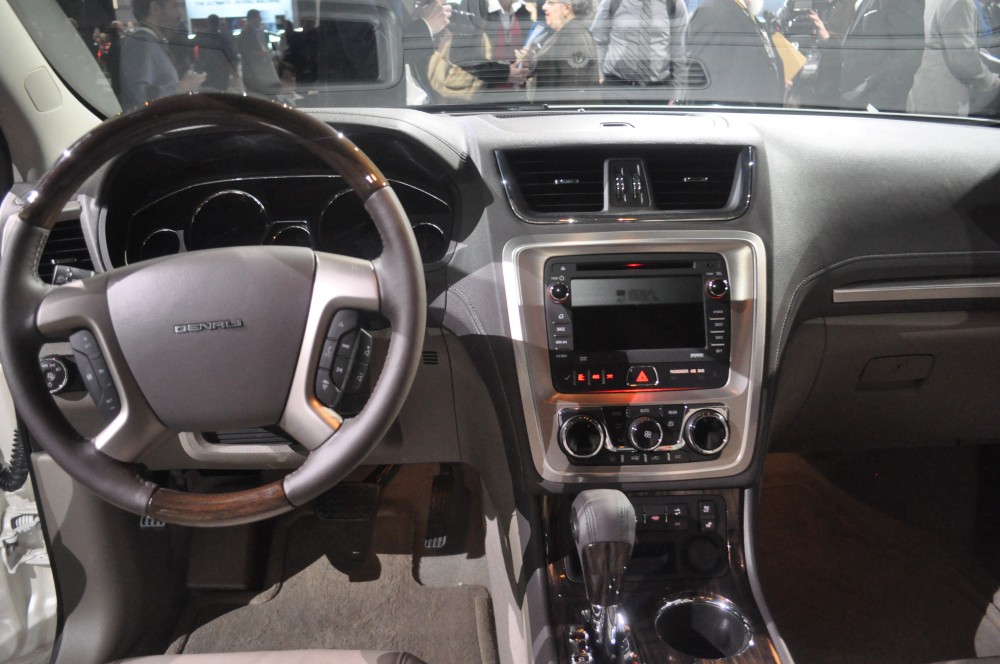 The interior also sees improvements,  utilizing more soft-touch materials, along with French stitching and red ambient light flowing across the dashboard. SLT models get aluminum accents on the center console, doors and dash, as well.

As revealed earlier last year, General Motors has been working on an industry-first center airbag to be implemented into its Lambda-platformed crossovers. The 2013 Acadia will be first introduce the new system to market, which is designed to help protect drivers and front passengers from side-impact collisions. The system deploys from the inboard side of the driver‟s seat and positions itself between the driver and front passenger. Blind zone alerts and rear cross traffic alert systems will also be available, while a backup rearview camera will be standard for the 2013 Acadia. The OnStar RemoteLink smartphone app will now allow for remote vehicle status reports, extended locking and unlocking capability, and remote start functionality from wherever users can find a data signal on their Apple iOS- or Android-based device.

Interior technology takes another step in the 2013 Acadia with the Color Touch Radio – first introduced on the 2012 Terrain – which will be standard on the refreshed large crossover. The IntelliLink infotainment system will be available as well. Minor interior tech improvements include HD radio capability, a photo viewer and a standard rear-vision camera with dynamic guide lines that will display on the high-definition screen.

While the 2013 Acadia receives some pleasant visual updates, it won’t amount to much if it drives like drowsy buffalo. Thankfully, the 2013 Acadia benefits from a next-generation Hydra-Matic 6T70 six-speed automatic transmission which promises better shift responses. Yay! However, We’re puzzled as to why GM failed to display new engine variety from the Acadia’s 3.6L V6 engine, which also continues to produce the same 288 horsepower it has since 2007. Where’s the extra grunt from the V6 in the form of the LFX engine? Where’s the EcoBoost-fighting, fuel efficient 2.0L turbocharged engine to take on the new Ford Explorer? Is the 288-horse engine really that satisfying and sufficient that it needs no updates, or an alternative? We find that hard to believe.

Lack of engine updates aside, we will embrace the 2013 GMC Acadia at first glace, and hope to take a closer look at it later this year. But we, and General Motors, enjoy your reactions. Give feedback in the comments below to take this topic to another level.