When I grew up, I played my fair share of Sonic the Hedgehog video games, where I guided everyone’s favorite blue spiny mammal on his adventures to stop the evil Doctor Robotnik. And when Sonic, the fast-food drive-in finally made its way to Michigan, a Toyota Sienna full of then-19-year-olds had to make a little road trip adventure to sample what those cable television commercials unrelentingly teased us about for two years. And as I’m writing this review, I’m drinking Neuro Sonic, which is supposed to help my brain recollect the time I had during my brief time with the small Chevy. With so many things named ‘Sonic’ — all of which bring up completely different memories — the name resonates with me. Let’s see if my adventure with this Sonic is something worth remembering…

A Car For The Kids

When asking friends and family their thoughts about the Sonic’s design, the responses were polarizing. The younger end of my amateur research study enjoyed the raw looks of the exposed headlamps and taillamps. The elders of my little demographic assessed the appearance as “weird” and that the lights “would be a bitch to clean.” Everyone is right, just as everyone enjoyed the standard 17-inch alloy wheels wrapped in Hankook Optimo rubber.

A bare bones Chevy Sonic will run you no less than $13,865. But this was no bare bones Sonic. According to the Monroney, our 2012 Chevrolet Sonic LTZ hatch in Summit White totaled $19,545, including $1,550 in options. Of which, there’s the $850 power sunroof, and the $700 upgrade to the turbocharged 1.4L Ecotec engine with 138 horsepower and 148 lb.-ft. of torque sent to the front wheels via an M32 six-speed manual transmission. It’s also assembled in GM’s Orion Township assembly plant in Michigan, making it the smallest vehicle made in America as of today. And because the Sonic comes as a hatchback, up to 30.7 cubic feet of cargo space is available with the second row folded flat.

Chevy designers were bold in making the car unique, and judging by the Sonic’s marketing efforts, the appearance seems to push the right buttons with the target demographic. Most of all, the looks of the Sonic give it the right fit with the urban landscape and college campuses. To back this up, my 21-year-old brother out of Western Michigan University and his roommates of “The Swim House” all favored the outspoken looks of Chevy’s capable compact contender. On a side note, I would also like to take this moment to recommend Sophia’s Pancake House if you find yourself on the wrong end of a Saturday morning in Kalamazoo. 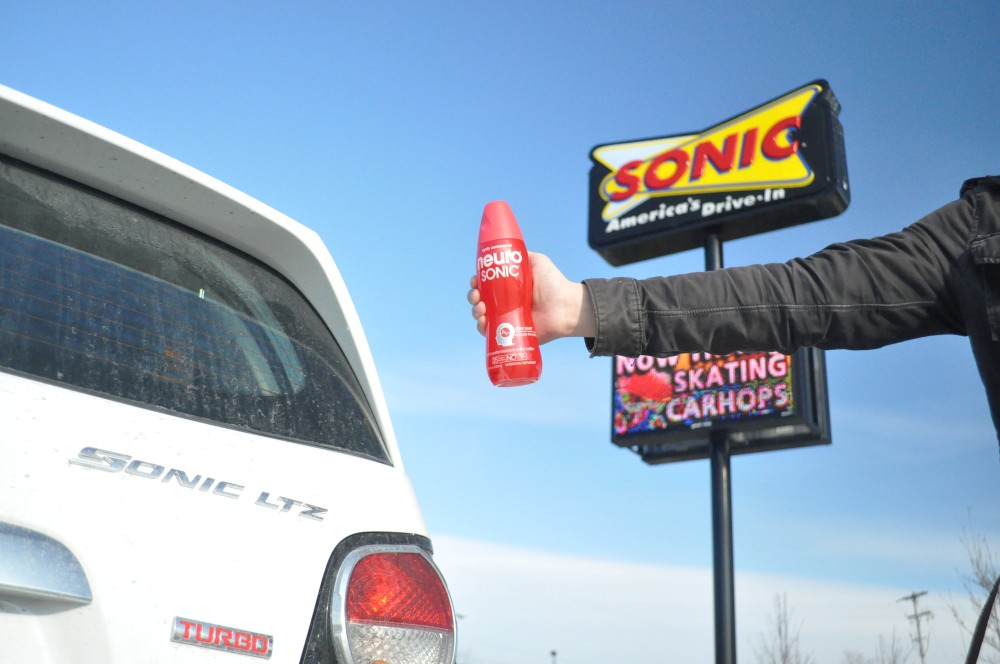 As I was saying, the interior design is just as distinct as the exterior, with the major highlight being the digital speedometer accompanying an over-sized tachometer. Elder automotive critics have come down on the layout as straying too far from the traditional layout to make sense and that I needed to get off their lawn. I say they’re too old-fashioned. It was easy to read my speed, my revs, my fuel mileage, my odometer… definitely not overly complicated for somebody who is used to staring at digital readouts (*points toward Millennial generation*). But is this another case of GM’s tendency to over-correct things? It depends on who you ask, really, but I had no issues about the instrumentation layout. The arrows on the AC vents were a nice touch, as well. Another pleasant surprise were the heated front seats, though they only had two settings: off, and medium rare. So I just turned the feature off when things got too uncomfortable.

The leatherette seats were a pleasant surprise in the cabin, as was the vast amount of storage space. Upon placing myself in the cockpit, I felt lofty headroom, and within arm’s reach of the drivers seat, there are five open storage bins to bring out the pack rat living inside me. There’s also a tiny opening in the middle of the center console that might puzzle a few people. That has a function as well; it holds parking stubs like a pro, along with tickets to Detroit Red Wings games. And when looking at the little mouth and the knobs that control the sound system, there almost appears to be a little face in the center console, and we wonder if it was intentional. There’s also not one, but two glove boxes. And being that it’s a subcompact, you may expect crank windows and a lack of other tech features. Wrong. The Sonic LTZ comes with power windows and mirrors, remote keyless entry, GM’s awesome Bluetooth system, XM/Sirius Satellite Radio, and a USB port for the necessary MP3 player. 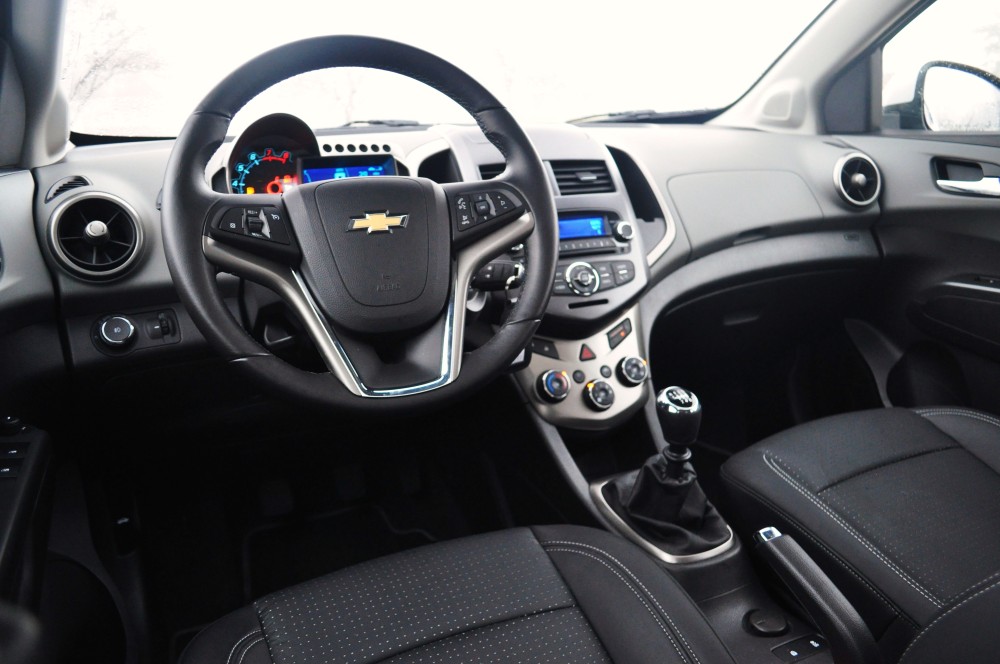 All of these nooks and crannies seem to make up for the lack of a center storage compartment, but there were no apologies for the headlining, which felt and looked exactly like the recycled cardboard used for egg cartons. But if that’s what it takes to keep the car affordable and handle like something well above its price range, you won’t hear a peep from me. Passengers riding shotgun also seemed neutral on the fact that the Sonic’s single armrest is reserved for the driver, but this is also something that may only matter to a few people. My passengers were also comfortable in the back seat thanks to 34.6 inches of legroom. That’s identical to the rear legroom found in the Hyundai Sonata — a midsized car for those not in the know.

Compared to the Cruze, the Sonic is roughly 500 pounds lighter, weighing in at 2,684 pounds while sporting an identical drivetrain. As a result, the driving experience is much more rewarding. You wouldn’t assume the spritely Sonic could handle, but if we had to choose any subcompact hatchback for under $20,000 in which to autocross, it would be the Sonic. And its 148 lb.-ft. of torque may not sound like much, but it’s still class-leading and gives the little Chevy decent passing power.

When pushing this car in a straight line, the 0-60 time of the turbocharged six-speed Sonic comes in around 8.2 seconds, which is elite for its segment and price point. And when the Sonic is moving about at 60 mph, the car is gently motoring at a low 1,800 rpm, which makes the ride noticeably quiet, again for a car its price and size. It should be noted that the Sonic is also on the heavier end of the segment, outweighing the Hyundai Accent by nearly 300 pounds, and the little Mazda2 by almost 500 pounds. With cars this small, that much weight makes a huge difference with their thrifty powertrains, and makes me wonder what the Sonic would be like if it went on a diet. On the flip side, the Sonic feels more solid and more stable at speed than the rest.

When driving the Sonic around the lower half of the Mitten, I felt that I was sitting a little more upright compared to the Cruze. As a result, I felt the car’s center of gravity beneath me, rather than feeling one with the Sonic’s chassis. There’s some body roll, but it still felt more taught and more supple than its rivals such as the Ford Fiesta and Hyundai Accent. And if something unfortunate were to happen, all Sonics are equipped with 10 airbags — as many as the larger Cruze — to protect passengers during impact along with the assurance of an IIHS 2011 Top Safety Pick. I imagine the little interior to resemble the inside of a marshmallow should all 10 airbags deploy. 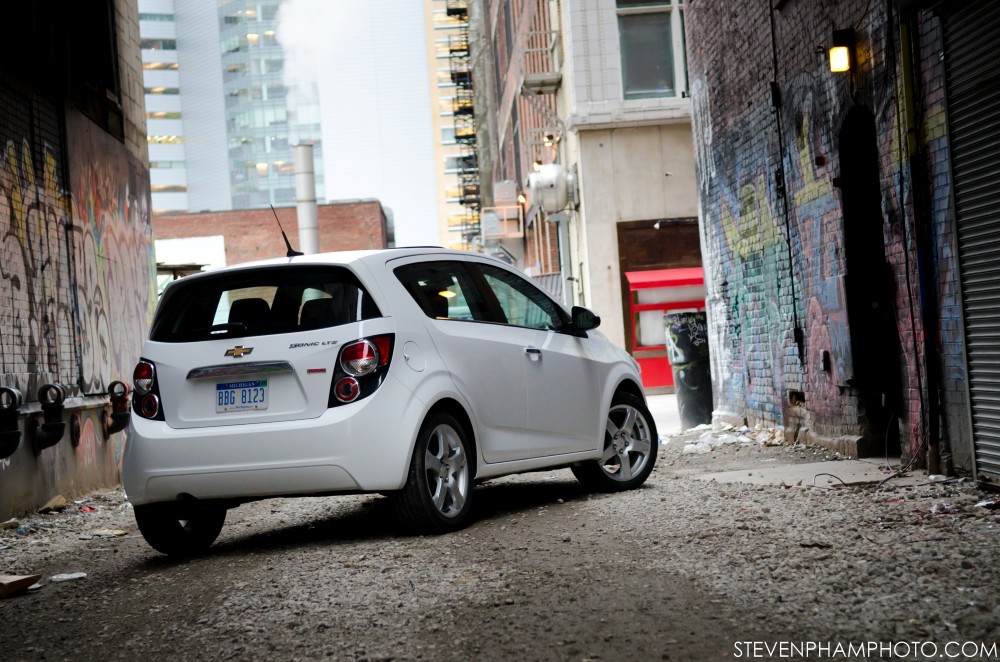 Yes, the Sonic is a very capable handler, and carries a unique design, but to give it a perfect score across the board would be a mistake. If there was anything I would change first, it would be the sound system. Crank the bass or the volume all the way up and the speakers sound as if they’re going to pop. For a vehicle marketed towards the under-35 crowd — a demographic that appreciates their sound quality and enjoys bass-heavy music — the expectations fall way short. Hopefully those rumors about a Sonic Boom inspired production model are true. And while I enjoy the digital instrument panel, I was discouraged to find that there was no instantaneous fuel economy readout — only the mpg average. Speaking of which, I figured my 32 mpg average to be low considering the 29 mpg city/40 mpg highway rating. That might be a deal breaker for some, unless the driving element rules over that of fuel economy.

What’s more, the C-pillar hidden handles for the rear passenger doors — despite their unique setup — were just plain awkward. And while stodgy steel wheels and hubcaps are omitted from the Sonic, so were rear disc brakes (instead there are merely drum brakes). Look for the Sonic RS to at least feature disc brakes on all four wheels, as well as a tighter suspension and sportier gearing. I’m also curious about the way in which the car would handle if Chevy offered sportier tires.

Perhaps one of my bigger gripes doesn’t involve how the Sonic is set up, but what it’s missing. There are minimal factory accessories for this car at the moment. C’mon! The kids love to accessorize these days, and a little more utility is never a bad thing. For instance, why isn’t there a roof rack option? A utilitarian urban hatchback such as this needs one. Needs it. I mean, what’s the point of marketing to all of these outgoing young Millennial buyers if they have a roof rack to secure their wakeboards? Or skis/snowboards? Or an apartment sofa? The Ford Fiesta offers it, and such a feature could sway the outdoor hobbyist into The Blue Oval’s showroom. Hopefully this is something on the way, as the Sonic is still a fairly new product. 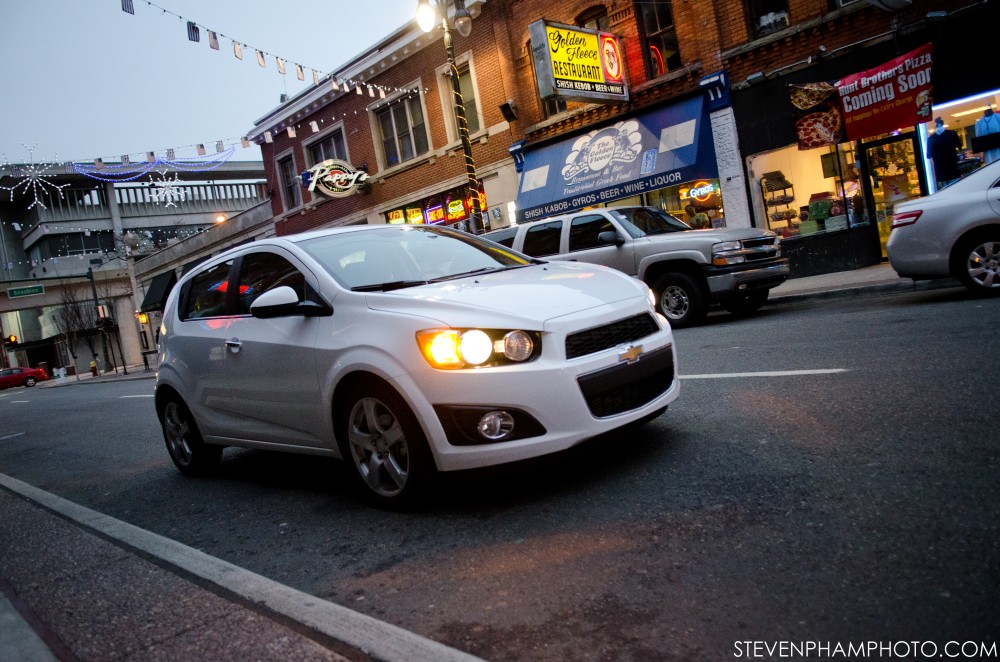 To continue on about the lack of accessories on the Sonic would mean that I am missing the point, as well as the reason I enjoyed the car so much in the first place. And it’s fact that the Sonic is fun on a budget, makes for a great daily driver, and can make us all move on from the forsaken Aveo. But it could become even better by simply adding a few more options and accessories — like these five prerequisites. I also wish it came in blue.

Did you notice I went this entire review without mentioning that the design of the Sonic was “motorcycle inspired”? Until now, that is. Try and find another one that could do the same.