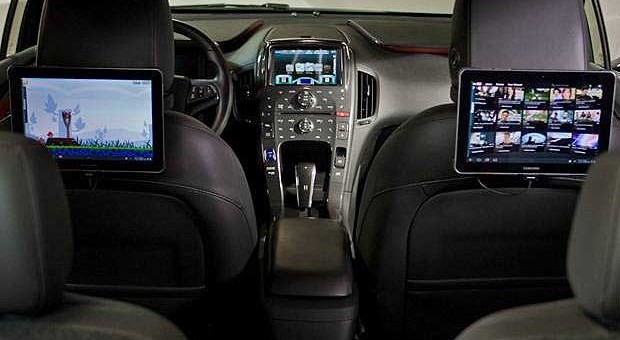 The 2012 Consumer Electronics Show, set to take place January 10-13 in Las Vegas, is shaping up to be quite the tech fest. But unlike previous years, the 2012 CES will host a General Motors exhibit featuring both OnStar and Cadillac.
Cadillac will show off the recently-announced CUE infotainment system, while OnStar will present “evolutionary research in the 4G LTE cloud connected vehicle space,” and will “reveal future expansions in the mobile application arena”. Oh, and OnStar will also make announcements about its FMV system currently on sale.
Now, we already know about CUE and FMV, so it’s only natural that we’re a bit more interested in the other OnStar-related material. While we aren’t sure on what exactly OnStar will show off related to cloud-connected vehicles and mobile apps, the following statement may provide a clue: “OnStar will also collaborate with the Verizon Wireless 4G LTE network to focus on the in-vehicle experience related to streaming content sharing for all vehicle occupants.”
Furthermore, a Chevy Volt prototype will show off applications such as:

Let’s see here… there will be a peek into GM’s future expansion in the mobile application arena… this could mean pretty much anything — from an all-new app to join RemoteLink to the extension of RemoteLink for the Windows Phone platform. Or possibly even an app store.
Then there’s the 4G/LTE bit; this one is fairly simple — integrate the next-generation of high-speed wireless technology (4G/LTE) into the vehicle, and streaming movies for second and third row occupants become a tangible reality. What’s more, OnStar could provide an integrated Wi-Fi hotspot for GM vehicles that would create a secure in-vehicle wireless network for iPads, iPod Touches, laptops, and other tablets, smartphones, and internet-connected devices. But we’ll have to wait until January 8, 2012 to find out exactly what OnStar has up its sleeve. Until then, one thing is for certain: cars are quickly becoming personal technology devices, much to the tune of smartphones, tablets, and personal computers.
What do you think OnStar will show off come CES? Sound off in the comments, and be sure to check the press release in its entirety below.