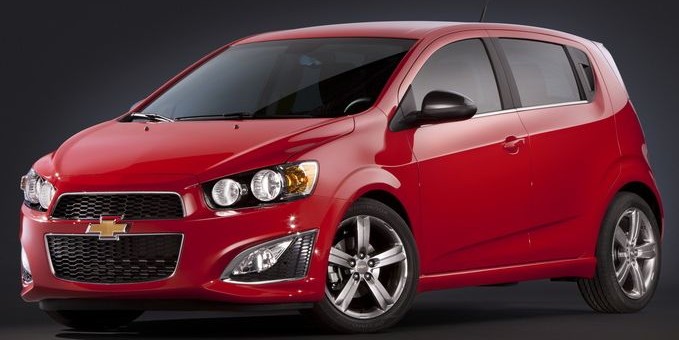 We’ve grown fond of the appearance of the Chevy Sonic. Its exposed head-lamps and tail-lamps add a touch of uniqueness, as does the vehicle’s motorcycle-inspired instrument panel. But some would cry out that the Sonic simply does not look aggressive enough. As it turns out, Chevy’s product development team was listening, and have decided to reveal an RS version of the Sonic online. Like the RS variants of the larger Cruze and Camaro, the Sonic RS will feature meaner looks that suggest performance — though no major performance upgrades have been announced besides sportier gearing and new rear disc brakes, rather than drums.

The Sonic RS brings to the table several exterior tweaks, with the most obvious being a revised fog lamp design very reminiscent of the original Aveo RS Concept that made its debut at the Detroit Auto Show two years ago. There’s also a new sport-tuned exhaust in the back, unique 17-inch wheels, and a tweaked rear fascia.

Consumers will only be able to get the RS package with the Sonic’s 1.4L turbocharged Ecotec engine, which pushes out 138 horsepower. Now, how about one with a 210 horsepower turbocharged 1.6L that graces the Opel Corsa OPC? It’s on our Christmas wish list. And is there perhaps an Eco model on the way as well?