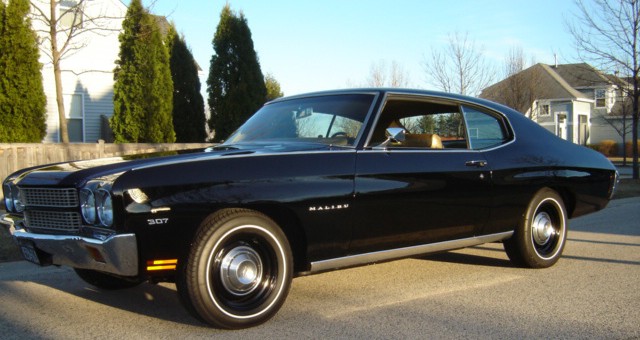 You’re cruising down Mainstreet in your 2012 Camaro SS, enjoying the wonderful burbling and purring of the 6.2 liter LS3 V8. Innocent bystanders notice you and your new American muscle; some even tip their hats to you in support of your choice of ride. As you come to a stoplight, a dark old-school Chevy rolls up to your left. Dismissively, you look at it and think, “get with the times, man. It’s 2011 already.”

The light is still red, so you decide that your stoplight neighbor’s ride could warrant a second look. After surveying its black-painted body in greater detail, you figure out that sitting next to you is a mint 1970 Chevelle Malibu. It looks bone stock, with the exception of the white wall tires. You then grab a gander into the Chevelle’s cabin to catch a glimpse of the driver: “just to see what kind of person rolls around in a 40 year-old car?”, you think to yourself. You make eye contact with the guy behind the wheel — and that’s when you instantly realize what both of you are thinking: “Drag time!” After nodding to accept the challenge, you make a right turn on a side street, and the Chevelle follows. Street racing is fun… but should never be done on Mainstreet.

The two of you reach a deserted road away from public traffic and stop side-by-side at a stop light. “On green,” you yell to the driver as you point at the light. Just before it turns green, you notice that there is something off about the guy’s Chevelle — it doesn’t sound like your average Chevelle from the 70s. The light turns green and — to your eminent surprise — the Chevelle keeps up with you every step of the way to the next light. “What the hell?”, you think to yourself. “Did I skip a gear or something? Did I mis-shift? How is this guy keeping up with me?”

The second light turns green… and you launch your Camaro with a roar. But the guy in the Chevelle doesn’t miss a beat — and almost beats you to the next light. “Alright,” you think to yourself. “Enough of this shit — time to step it up and show this clown who’s boss.” So you disable StabiliTrack, prep your Pirellis by roasting them a bit, and await the green light. This time, the guy in the Chevelle ends up beating you by a nose hair — and you know it. You signal the Chevelle to pull over. “What the hell you got under there?”, you ask.

The driver lets you in on his secret: beneath the stock-looking Chevelle body (even the 307 fender badges) lies an Escalade-sourced twin turbo 6.0 liter LQ9 iron block V8… with a pair of turbos from a Buick Grand National. Depending on the boost, his mill makes 555-607 horsepower (compared to your 420) — with not a sign of turbo lag in sight. “On a good day, I run low 11s or high 10s in the quarter. And I get 20 MPG with the A/C on when cruising,” he says, smugly.

“Too bad all four wheels are hooked up to drum brakes, you ass clown”, you think to yourself. You peek inside the cabin and notice that the interior is well-preserved, including the bench seat and console shift. But you care for the grandmother-like tan color.

Even though this anecdote is entirely fictitious, the Chevelle in question is totally real. It is the perfect sleeper? With nothing to indicate the car’s true performance capacity, it’s pretty darned close… wouldn’t you say?