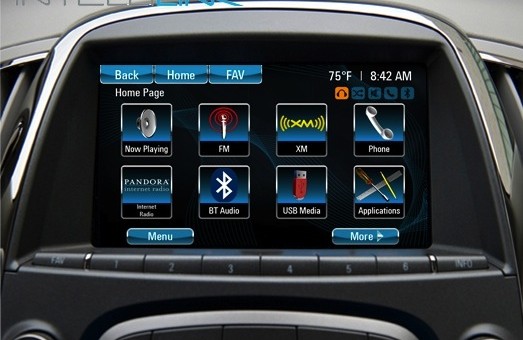 General Motors is considering creating an app store for the infotainment systems of its vehicles, GM Authority has learned.

According to industry insiders, the idea within GM is currently in a nascent phase but could come to market “very quickly” if given the green light. The proposed app store would offer downloadable applications for GM’s new infotainment systems, including Chevrolet MyLink, Buick and GMC IntelliLink, as well as Cadillac CUE.

From a technical perspective, the apps would provide an “exchange layer” between the vehicle and the apps running on the user’s smartphone, offering the ability to control a smartphone app using voice commands or — when safe — the vehicle’s color touchscreen. The app store would expand the availability of “perfectly compatible” apps such as Stitcher and Pandora, both of which are currently built into GM’s new series of infotainment systems.

For instance, an Apple iPhone user wishing to use popular social media app HootSuite would be able to launch the app, listen to the social stream, compose, and then send a message/update to a social network — all using voice commands. Another potential example involves a shopping app such as Amazon.com’s, which could allow the driver to search for a product using voice commands (Nike Free Running Shoes) and then have the system read out the results and lowest price; from there, the driver could order the item or continue shopping by adding items to the cart — all without taking his hands off the wheel or eyes off the road.

Furthermore, GM Authority sources say that the question internally is who, exactly, would build the apps for GM’s app store. In effect, the app “exchange layer” that would provide the functionality and translate the smartphone app into something that’s recognized by the vehicle won’t be directly visible to the driver, thus potentially decreasing its value.

For many software developers, the proverbial carrot is the revenue (and profit) made from the widespread sale of the app. GM, however, questions the level of appeal that developing an exchange layer would be for developers — since the app would be less visible to end users.

Some within The General are proponents of the idea while others contend that it’s simply not up to GM to provide this kind of functionality, instead leaving it to smartphone makers.

If released, this would be an industry first. While Ford’s SYNC is already capable of similar functionality, what’s being discussed here is much more involved, much more useful, and quite different — from the usability point of view.

Needless to say, the car is the next frontier of modern infotainment innovation — and it would be great for GM to lead the way in the space, from the get-go. But the dilemma of attracting developers must be fully strategized before moving forward — otherwise, the GM app store may not achieve its highest potential.