With several hours remaining before we get behind the wheel of the 2012 Buick Verano, the Trishield brand has just announced that its engineers have spent at least 1,000 hours working on seating comfort to prevent hot spots on long drives in the new compact sedan. Development time was also spent finding a way to protect hair-dos from headrest interference.

To deliver top-notch seat comfort and interior craftsmanship luxury vehicle owners have come to expect, Buick benchmarked the Verano against key competitors such as the Acura TSX and Lexus IS, making comfort a first priority.

“When we set out to design a comfortable interior for Verano our goal was for customers to feel like vacation begins as soon as they get in the car, and not when they reach their destination,” said Brian Schell, Verano program engineering manager. 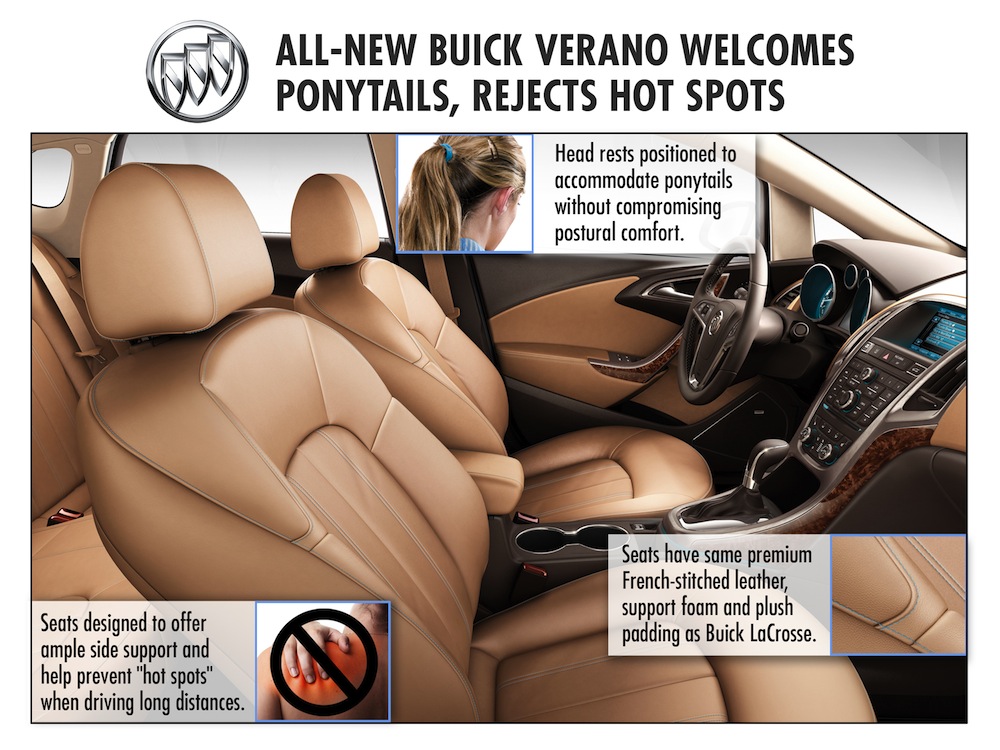 The vacation reference is quite fitting in our opinion, given the fact that the Verano is Spanish for summer… get it?

As far as materials go, the Verano’s chairs use the same grade of premium leather, support foam, and padding as the larger (Buick flagship) LaCrosse. The seat bolsters on the Verano, however, are designed to provide an increased amount of side support to hold passengers in the most comfortable position.

Buick is also extolling the craftsmanship of the Verano’s interior, calling attention to French-stitched leather, an adjustable center console armrest, and padded door arm rests and bolsters. While a leather-wrapped steering wheel and gear selector are standard fare, a heated wheel and seats are available as an option. The center stack controls have a soft-touch texture and automatic climate control, coupled with voice control via Buick’s new Intellilink infotainment system, are standard.

But what really caught our attention was the fact that Buick shoehorned a dozen noise-reducing technologies throughout the Verano’s body structure for improved cabin acoustics (read: cabin silence). We thought the Cruze, the Verano’s platform mate, was already very quiet; looks like we’ll find out soon enough just how quiet the Verano really is.

It’s great to see Buick mention direct luxury competitors such as the Acura TSX and Lexus IS by name. To us, this shows that the Trishield is truly serious about competing in the higher end of the segment sooner rather than later. Additionally, the Opel Astra doesn’t get these modifications, suggesting that Buick has the freedom to pick its own direction rather than import straight-on rebadges. Even then, it’s important to remember that the average car-buying public will actually appreciate these ancillary comfort features more than automotive enthusiasts ever will.

Here are our first impressions of the Verano at the 2011 New York Auto Show. Enjoy!