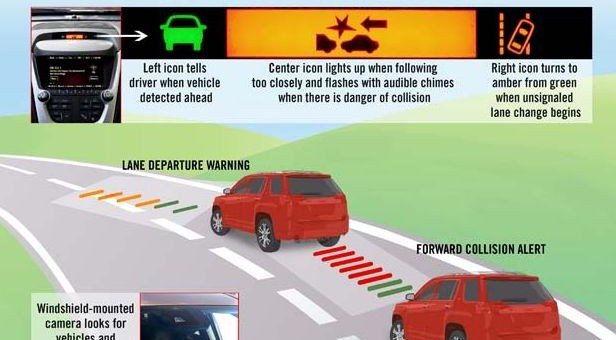 Have you ever found yourself too busy or distracted while driving to conduct a routine blind spot check upon merging lanes? If so, the GMC Terrain is the vehicle for you with its new optional active crash-avoidance system. That way, rather than just simply looking and paying attention, you can rely on the car to do it for you with its high-resolution digital camera mounted just in front of the rearview mirror that detects vehicle shapes and lane markings.

Since the system is camera-based, rather than radar-based, it bases its calculations every 14 frames per second. The camera must also be unobstructed from things like mud and snow.

The new crash-avoidance system utilizes audible warning signals combined with a display mounted above the center console to inform the driver that they are departing a lane without signaling first, following another vehicle too closely, or if a collision appears imminent. If the latter is true, a red light flashes, your radio shuts off and it’s really up to you what happens next.

The system will run for $295, or roughly the price of enrolling in a cut-rate driving education program.

The 2012 Chevrolet Equinox offers the same feature as well. And having used it, we have to say that it’s best when the audible functions are disabled. Stay tuned for more on that later.