This article is part of the GM Authority Wish List series, where we — as the name implies — write about our wishes, hopes, and dreams as they related to General Motors products.

Last week, I was walking by a totally ordinary Subaru Impreza (not the 2012 model) and noticed something unusual at the bottom of its windshield. Upon closer examination, I saw a set of window defrosters (not defoggers) underneath each windshield wiper. You know, the same brownish strips that run horizontally on the rear window of pretty much all cars made in the last two decades. For a few seconds, I was taken aback… and then I got it: the Subaru had a defroster on the windshield that   defrosted the wipers! 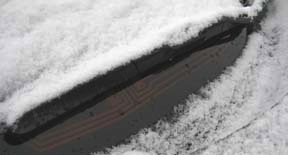 While that’s not anything to get overly excited about (like a powerful engine, rakishly good looks, or a world-class cabin), I was impressed nonetheless. Heck, I don’t even know if Subaru is the only manufacturer to offer such a feature. But I immediately thought of the approaching Colorado winter season and the fact that I’ll be parking my 2011 Cruze outside. In the cold. In the snow. And when cold and snow mix, the result — more often than not — are windshield wipers that are stuck to the glass.

Activating stuck wipers will result in one, two, or all of the following three outcomes:

And as one hits the road and the cold winds of a winter morning begin to pound against the windshield, those wipers and the windshield won’t be getting any warmer until the sun comes out.

Thus, Subaru — which caters to many customers inhabiting northern climates — came up with the ingenious idea of clearing up the wiper blades via the glass defroster, a feature that undoubtedly leads to better visibility (since the wipers will be that much more effective) as well as a prolonged life of the windshield wipers (since the wipers will be warmer), thus saving the owner of the vehicle money on replacing the blades. And if you’ve ever experienced uneven wipers (for having been “torn” upon activation or for having ice or snow stuck to them), you’ve most likely experienced the sometimes-thick lines that remain on the windshield as a result. And these can’t be any good for visibility, and thus, safety.

And while we’re at it, let’s go all out and add other elements for snowy climates, such as heated headlight washers, heated windshield wiper nozzles (so the water doesn’t end up freezing at the tip of the sprayer), and rear-seat pass-throughs for hockey sticks and skis (folding the seat gets old after a while).

Useful? Complex? Feasible? Sound off in the comments below!

This article is part of the GM Authority Wish List series, where we — as the name implies — write about our wishes, hopes, and dreams as they related to General Motors products.