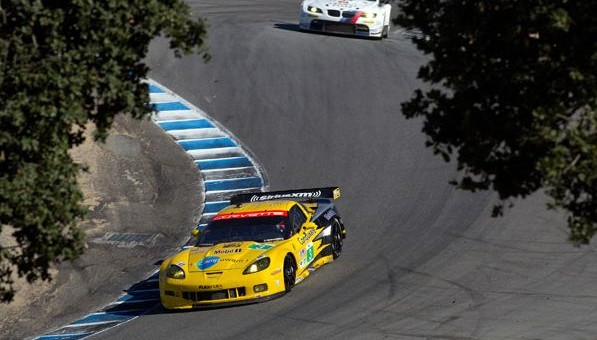 California’s Laguna Seca racetrack saw a lot of action this past weekend, with both the American Le Mans Series and the SCCA World Challenge holding their races during separate days. In ALMS action, Corvette Racing struggled on the course, placing merely fifth and seventh while Cadillac Racing had only one car complete the race with a fourth place finish in SCCA action.

Corvette Racing drivers Oliver Gavin and Jan Magnussen managed a fifth place finish at the end of the six-hour race in their No.4 C6.R, while Tommy Milner and Olivier Beretta took seventh in the No.3 car. The team points to grip issues with their tires as the main culprit of their disappointing results. Corvette Racing will close out the ALMS season at Road Atlanta in Georgia on Saturday, October 1 for the 10-hour/1,000-mile Petit Le Mans, which the team won last year.

Cadillac Racing saw their fair share of troubles as well, with Andy Pilgrim wiping out on the first lap, ending his day early, while Johnny O’Connell managed a fourth place finish while continuing to point towards the cars’ lack of horsepower as to the reason for an eluding victory. O’Connell, despite finishing fourth,  is second in the driver’s points standings after the round, with 1,048. Mike Skeen is currently in front with 1,048. Cadillac Racing will follow Corvette Racing to Road Atlanta as well to close out the season Friday, September 30.