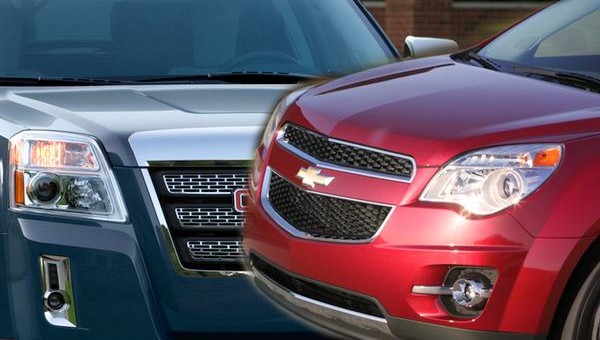 Yupp, you read that right: through August of 2011, Ford’s compact and midsize crossovers have outsold those of Chevy and GMC. By exactly 60,645 units in the United States. Guess the hot-selling market-dominating Toyota-gobbling Equinox ain’t doing as well as everyone thought it was…

While the Chevy Equinox and GMC Terrain crossovers sold a combined total of 186,079 units, Ford’s Escape and Edge were responsible for 246,724 sales. So, why is GM losing out to The Blue Oval in mainstream compact and midsize crossovers? The answer, in our opinion, is choice.

Ford offers a compact crossover in the form of the Escape as well as a midsize crossover in the form of the Edge to Chevy’s (and GMC’s) Equinox (and Terrain) — which aren’t really compact or midsize… they’re right in between. Offering two separate models equips Ford with the advantage to more effectively cater to different dimensional preferences and price points in much the same way that the Cruze appeals to a different audience compared to the Malibu.

One possible answer to this crossover conundrum would be to create two entirely new models: a compact version (perhaps based on the Delta architecture) and a midsize variety (perhaps based on the Epsilon platform). Compared to the Equinox, the compact would compete much more directly with the likes of the Escape (especially the next-generation model), Kia Sportage, Hyundai Tucson, VW Tiguan, and the Honda CR-V, while the midsizer, which could offer a third row as an option, would go up against the Edge, Highlander, Sorento, Santa-Fe, Pilot, and Murano.

Doing so would allow GM to better serve the needs of crossover shoppers while delivering a better product.

One of the challenges The General faces with the Equinox and Traverse, the latter of which is truly a full-size CUV, is achieving comparable fuel economy to vehicles that are a segment smaller. As I mentioned before, the Equinox and Terrain are not compact utes from a dimensional perspective — making it more challenging for GM deliver segment-leading fuel economy. And since the crossovers kind-of- sort-of currently compete between the compact and midsize segments, they will be cross-shopped against other smaller and lighter vehicles from the competition. These rivals will ultimately perform better in fuel economy ratings, acceleration time, and stopping distance due to the simple fact that they’re smaller.

Additionally, the “true” midsize crossovers (Highlander, Pilot, Sorento) will be bigger than the Equinox/Terrain, offering more usable space. Being stuck in the middle, therefore, doesn’t offer any particular advantages to The General.

If GM were to offer a true compact crossover, it could lower the price point of that hypothetical vehicle — becoming more competitive with the likes of the Ford Escape, Kia Sportage, and Hyundai Tucson. What’s more, it could charge more for a proper midsize CUV, effectively widening the gap between a compact and midsize vehicle, leading to increased profitability. The strategy is akin to that of Mercedes Benz when it comes to CUVs: there’s the compact GLK, the midsize ML, and the humongous GL. Each is clearly positioned in its respective segment (compact, midsize, full size, respectively); each offers more than the other in a clear, stair-step progression.

At The End Of The Day…

The numbers speak for themselves. And they will only get worse for GM as Ford releases the all-new Escape and Edge over the next two years and Hyundai unleashes its Santa-Fe. To be more competitive, the Equinox — as we know it today — would have to go away to make room for two models: a smaller crossover and a slightly larger one — just like Holden’s Captiva 5 and Captiva 7 models.

And at that point, Chevrolet’s crossover offerings should go global… and a behemoth fullsizer like the Traverse makes a lot more sense than it does today.