During a sweltering morning in downtown Birmingham, Michigan stood four or five Buick LaCrosse full-sized sedans parked on the side of the road. To passers by, they may have been taken for the very same models you could find in a dealership, or your mother’s driveway. But they’re not. These unique Buicks were in fact preproduction models featuring eAssist — a mild hybrid setup revealed at 2010 Los Angeles Auto Show boasting 36 (not 37) miles per gallon on the highway. Full a full descriptive on how eAssist works, read more here.

After being treated to a breakfast and stuffing my face with free bacon and sausage (just kidding, I’m on a diet), a limited amount of local journalists and myself set off for a quick drive in the new 2012 LaCrosse with eAssist. It was 95 degrees, but thankfully, the air conditioning was on. 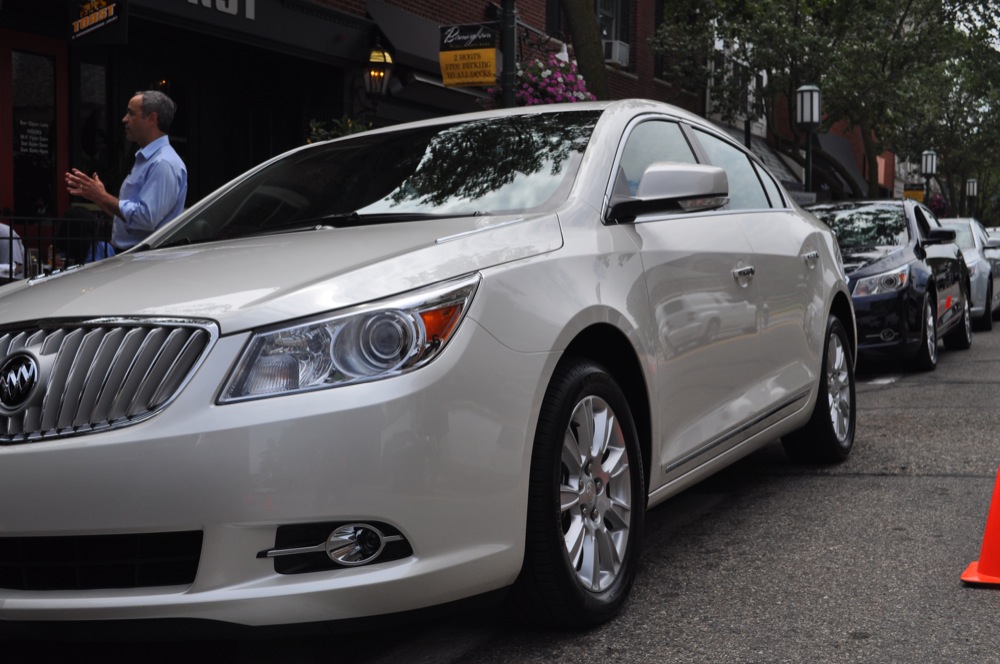 Speaking of AC, the car has an Eco mode setting, which helps optimize fuel economy while the AC unit is engaged. In doing so, it enables more frequent and longer-duration engine Auto Stop periods. Every time the car comes to a complete stop, the engine is shut off (though we didn’t test how long it would remain shut off with the air conditioning on full blast, or the radio blasting Sirius/XM Classic Vinyl). To note, the vehicle tells the driver when the engine stops with a subtle “Auto Stop” indicator on the bottom of the tachometer. As soon as my foot came off the brake pedal, the engine immediately and seamlessly fired back up, and resumed to run like normal. This process reduces the amount of unnecessary fuel usage, as does the aggressive fuel-cutoff feature, which minimizes the amount of fuel fed to the engine during deceleration periods. Regenerative braking is also present, which captures energy lost through heat when brakes are applied, and puts it back into the car’s battery located in the trunk.

Couple the Auto Stop and fuel shutoff features with aerodynamic grille shutters plus an underbody panel setup similar to the Chevrolet Cruze Eco, and this 3,800-pound mild hybrid is primed for amazing fuel economy. Also with much thanks to an all-new Hydra-Matic 6T40 6-speed transmission, the 2012 Buick LaCrosse eAssist drives in a much more refined manner than the current 6-speed mated to an un-eAssisted 2.4-liter ECOTEC four-pot available today. 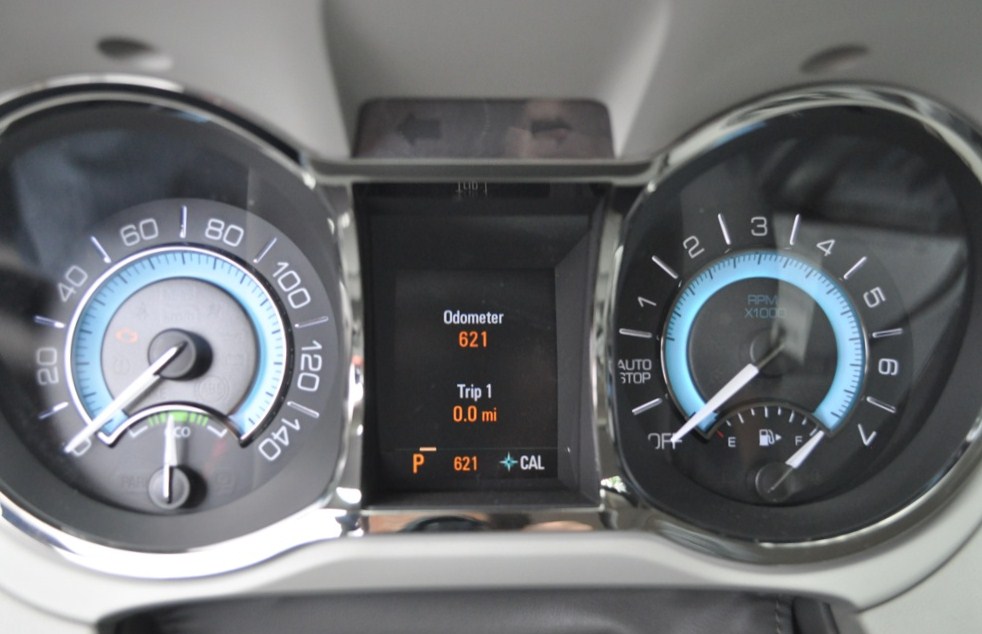 The transmission is also smart enough not to shift early when driven in a hurry, as it will pin the rev limiter to 7,000 RPM during the first pair of gears before grabbing another, allowing all 182 horsepower to flow through the front wheels. Speaking of which, the LaCrosse eAssist features all-new Green X low rolling resistance tires from Michelin that will be exclusive to the car upon its launch. NVH levels also seemed a bit more nullified this time around, which only enhanced the comfort of the ride that was already good to begin with, aside from the outgoing clunky transmission.

Of course, most consumers will not care about how Buick’s updated flagship achieves 25 MPG in the city, 36 MPG on the highway and 29 MPG combined; they will simply just be turned on by the fact that it does. Equally impressive is the range, which increases from 414 to 455 combined driving miles compared to the outgoing 4-cylinder configuration all while using a smaller tank (down to 15.7 gallons from 18 gallons). Consumers also may not care that the 15 hp lithium-ion battery is manufactured in a Hitachi plant in Indiana, or that the car itself is built in Fairfax, Kansas. Regardless, chances are they will all equally enjoy the way it drives, and at $29,960, it starts at nearly $4,000 under the price of the smaller Lincoln MkZ Hybrid (though it does not beat the Lincoln in fuel economy). 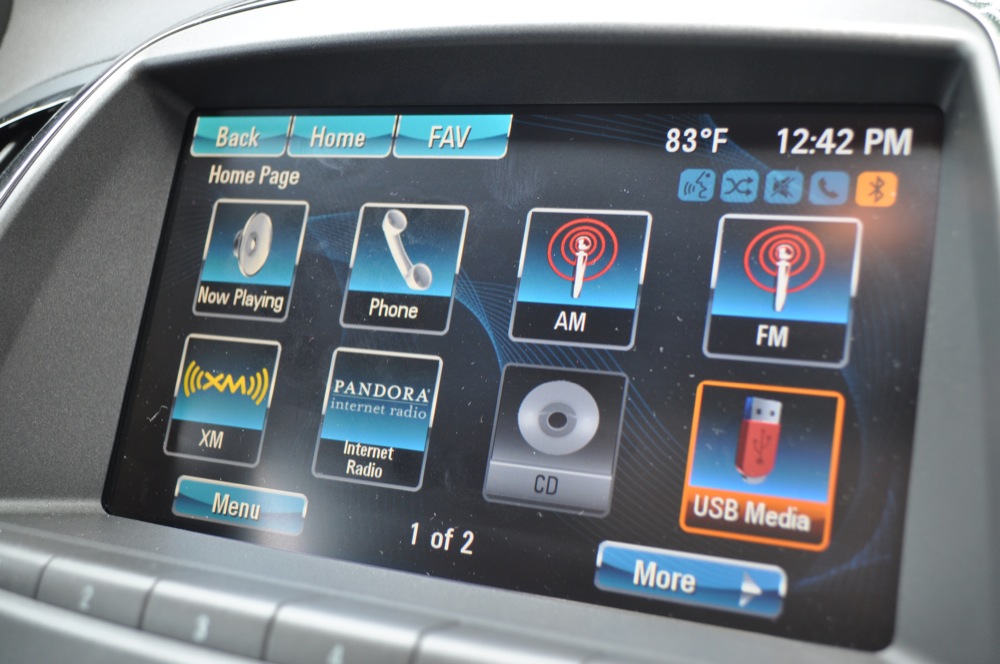 Before the event was over, a bunch of us took turns cramming into the back seat of a lone LaCrosse in order to get a demonstration of Buick’s updated infotainment interface equipped with a preliminary version of IntelliLink. Some notable updates are in store here, including that every XM radio station will receive its own hi-res color background that spans the 8-inch touch screen that goes along with its theme, genre, or sport, or whatever. You can also voice command the system to play any FM, AM or XM radio station by properly saying so (ex: “play AM radio 760”). The same goes for artists coming out of your flash drive or MP3 player that is plugged in. And thanks to smartphone connectivity, Pandora Internet Radio or Stitcher Smart Radio will be able to stream through the speakers as well. 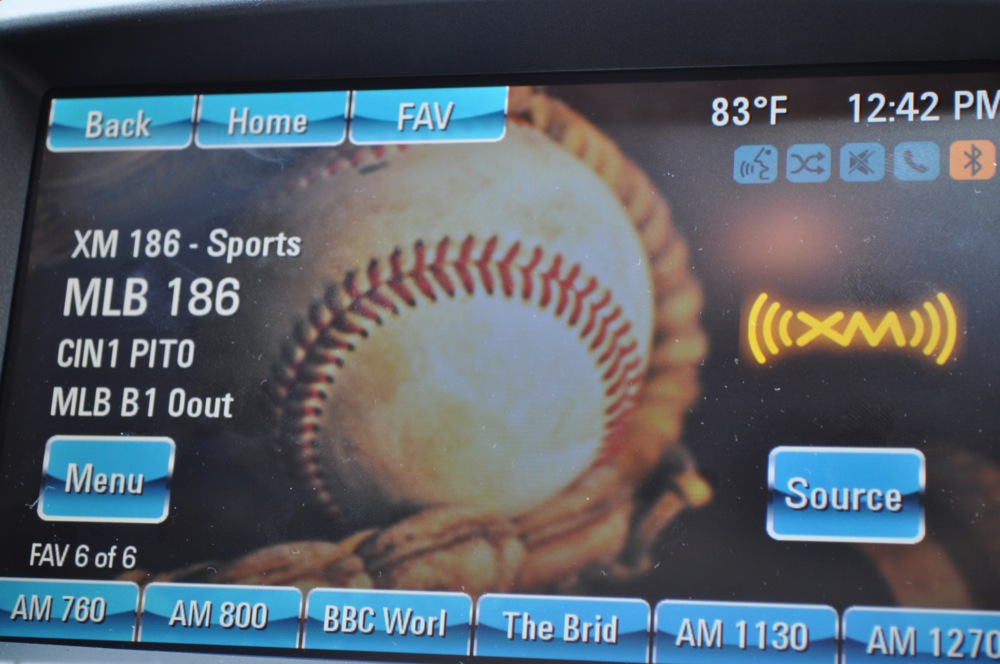 All I had was maybe 20 minutes of seat time in the upcoming 2012 LaCrosse with eAssist, but it didn’t even take that long to tell that Buick has a real winner on the way. Look for it this coming fall, along with the 2012 Regal GS, Regal with eAssist and Verano.