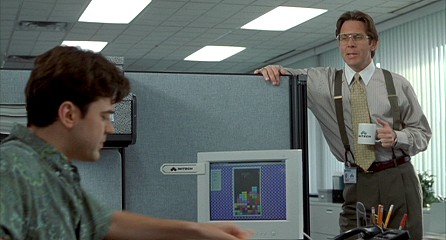 It seems that only yesterday GM claimed bankruptcy and re-emerged as “The New GM”. Two years later, is the New GM’s marketing approach any different than that of the old GM?

Consisting of a healthy mix of insiders with international experience as well as outsiders from other automakers and non-auto industries (such as tech firms), it’s safe to say that GM’s senior management has turned a new leaf. GM’s board has also become an eclectic mix of individuals with diverse backgrounds. All this is to say that I believe GM has the proper “directive” moving forward. I’ve read just about everything that has come out of the RenCen and there is very little rhetoric that I do not agree with.

Between A Rock And A Hard Place Lies…

But underneath “Mahogany Row” lies what is known as middle management. These are the folks who have the mandate to carry out the directives set out by senior management while ensuring that employees develop in such a way that they can contribute to the organization in a more meaningful way. Middle management positions are probably the most challenging in one’s career, requiring the execution of direction while putting out fires that senior management find petty (yet employees find significant). Directors need to have a strategic outlook while, at the same time, being tactical… good luck with that.

So how does a Director go about ensuring that his/her team successfully executes a mandate while growing individuals? It really comes down to the Director’s ability to manage change. Managing change is so much more than introducing a new process, strategy or technology (all of which GM has been doing over the past few years). It’s also about constantly introducing new team members to existing ones. This is known in the corporate world as “cross-pollinating” — one of the essential elements to nurturing innovation. Simply put, the same people doing the same jobs will net you the same results. It is simply a non-starter to assume that someone can change their thought process in a substantial fashion just because a company has re-branded itself.

For instance, let’s take a look at GMNA’s marketing division: individuals change positions either when a new product is launched or when someone leaves the company. This approach is no different from that of the Old GM: instead of moving a Marketing Manager to a different product line after three or four years (optimum in my opinion), General Motors continues its old ways of “keeping a seat warm.” For example, moving the Impala Marketing Manager to the Camaro brand would actually benefit not only the individual (in being introduced to a new team, approach and customer), but it would also benefit the organization as a whole due to the individual employee gaining a broader perspective on the subject of marketing in general. Unfortunately, GM currently moves marketing positions only when someone leaves.

And while many tend to think of marketing as advertising, today’s marketing discipline also encompasses product planning, pricing, content, deployment, and resolution management (just to name a few). And since advertising for car companies today are now handled by outside agencies like Campbell-Ewald and The Omnicom Group, marketing teams can now place increased focus on the product itself.

One initiative that I appreciate, however, is the amount of engineers found on the Volt marketing team. For starters, this provides a more detailed quality of product communication for the customer. What’s more, engineers in general tend to not be spin doctors — a set of skills that organizations have cherished at a time when the internet did not exist and customers could only attain information from the firm itself.

As such, moving engineers into the marketing field of a company sets up a well-rounded resource that provides both mathematical and artistic experience. In addition, bringing in resources from the competition or even companies outside the automotive sector such as Apple, Microsoft or Cisco (to name a few) will further stimulate innovative marketing initiatives thanks to cross pollination.

Cross Pollination A Must When It Comes To Middle Management

In the same way that GM has rebuilt its senior management team through cross pollination, it must do the same with the marketing and sales teams as well. Failure to do so on a more frequent basis will only result in the same old GM marketing doing the same old things in a rapidly changing environment in which Volkswagen, Ford, Kia, and Hyundai are growing market share at an astonishing rate.

At the end of the day, cross pollination must occur on a more rapid basis if General Motors truly wants to create its leaders of tomorrow while being the leading automaker it set out to be after bankruptcy proceedings.