I haven’t had enough of testing cars I can’t afford. And the 2011 Cadillac Escalade Platinum portfolio happens to consist of some of the most expensive vehicles General Motors makes, second only to the 638 horsepower Corvette ZR1. So yeah, I did feel privileged to drive the 222-inch ESV version, but damn did I hate filling it up.

To be short, my tester featured everything except a bathroom and a butler (well, almost everything), and carried a lofty $87,345 sticker price plus a $950 destination charge. No options — as everything comes standard with the Platinum package, and the standard features are a looong list. These include two overhead Rear Seat Entertainment monitors, plus an additional two more independent screens located behind the first row headrests. Then there’s the olive ash and walnut burl wood — exclusive to the Platinum Edition — that decorates the cockpit quite elegantly and is complimented with aluminum accents. The 14-way Tehama leather seats I sat in felt top notch, and could be heated or cooled with the push of a button, much like the front row cup holders. The steering wheel was heated too. The list goes on with MP3/iPod connectivity, Bluetooth, tri-zone climate control, a blind-zone alert system, ultrasonic rear parking assist with a backup camera… you get the idea. 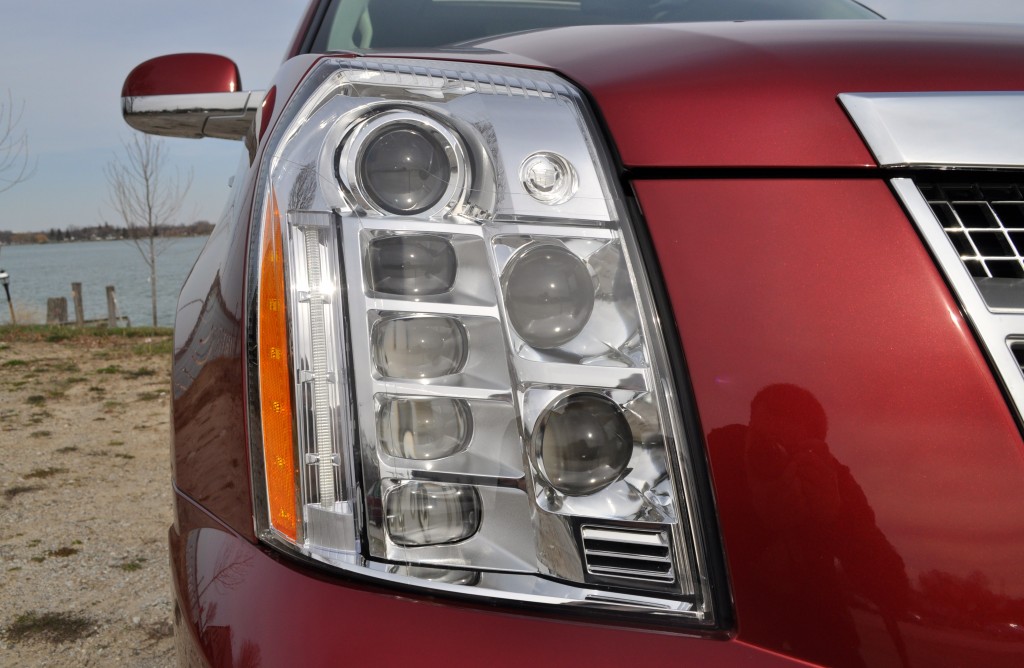 Cadillac’s exterior designers did a good job of trying to separate the ESV Platinum from its Chevrolet Suburban and GMC Yukon platform mates with lots of chrome accents, a massively decorated shield-shaped grille, complimented by equally eye-catching headlamps that even incorporate the Cadillac emblem within its design, a subtle feature that is the cherry on top of this 5,694-pound rolling bling cake. Did I mention the 22-inch chrome wheels? Well, I just did.

As far as gas mileage goes, it should be common sense that somebody who can actually afford this beast doesn’t care about such things, but I will let it be known that our tester (equipped with all-wheel-drive) is rated at a combined 14 miles per gallon, with 13 MPG in city driving and 18 MPG in the highway. And I had to try really hard to get the Platinum to touch 18. Needless to say, it loves gasoline — but it’s not a Cruze ECO, either. And if you’re one of the few out there who is sincerely looking into buying one but was hoping for better gas mileage, get the hybrid version. If you want to pay for cheaper fuel, fill it up with E85. 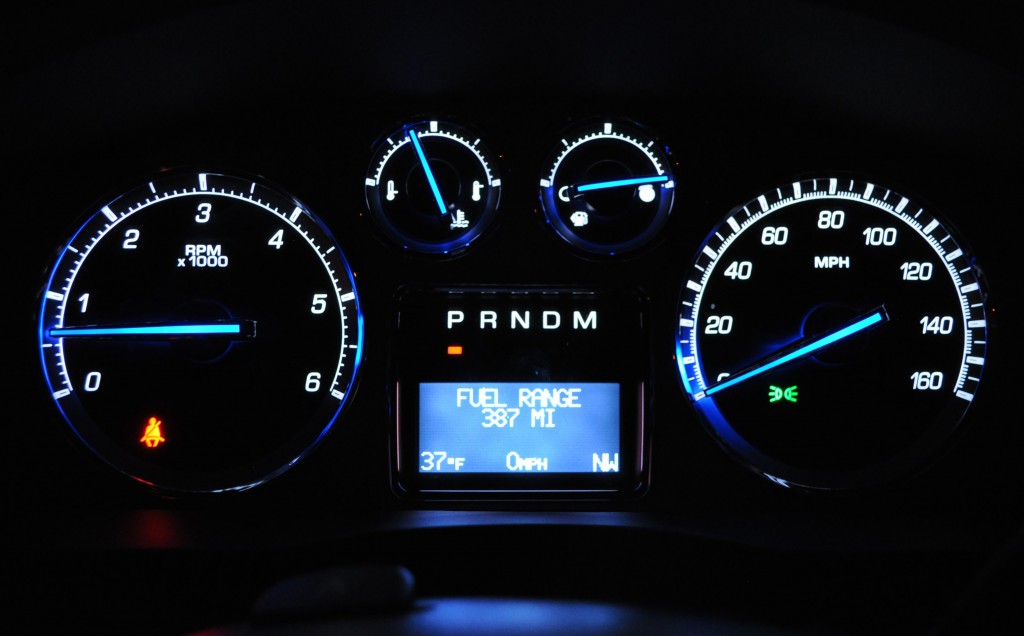 While the Cadillac CTS-V represents just about everything General Motors knows about performance, the Escalade ESV Platinum represents everything the company knows about swank and luxury. In that regard, this is Cadillac’s flagship. It’s price is unreachable to just about probably everyone reading this. It’s 403 horsepower 6.2-liter Vortec engine is loud and unapologetic while its cabin hushed just about everything, giving more clarity to its Bose 5.1 surround sound system that is one of the best on the market today. Yes, it kicked the bass out hard while I seemingly hovered over the road with the windows down blasting XM/Sirius Hip-Hop Nation, because that’s just what my instincts told me to do. But that’s not to say this shiny SUV is devoid of any blemishes.

Probably the most noticeable feature that I found displeasing was the ESV Platinum’s hardware. The system that powers the touchscreen satellite navigation system and radio is unfortunately dated. The fact that song and artist names would be cut off if they had too many characters is a degree of unrefinement (if that’s a word) that should not be seen in a vehicle like this, ever. Adding to that was the clunky Bluetooth system that required a fair bit of work to program with my phone, and nowhere near as easy or as intuitive as the system featured in the Chevy Cruze ECO I tested — a car less than a quarter of the price as this thing. Engineers tell me it’s not as easy as a simple swap with more current tech a la the Chevy Cruze or Buick Regal, which means we’re going to have to wait until the next generation of GM SUVs and their new hardware until the problem is fixed, which are a few years off. Now couple all of that with ugly low-budget features such as visible metal parts underneath the 3rd row and terribly cheap looking seat belt loops and I am reminded that I’m still in an Old GM layout while forgetting that I’m driving an $88,000 SUV. 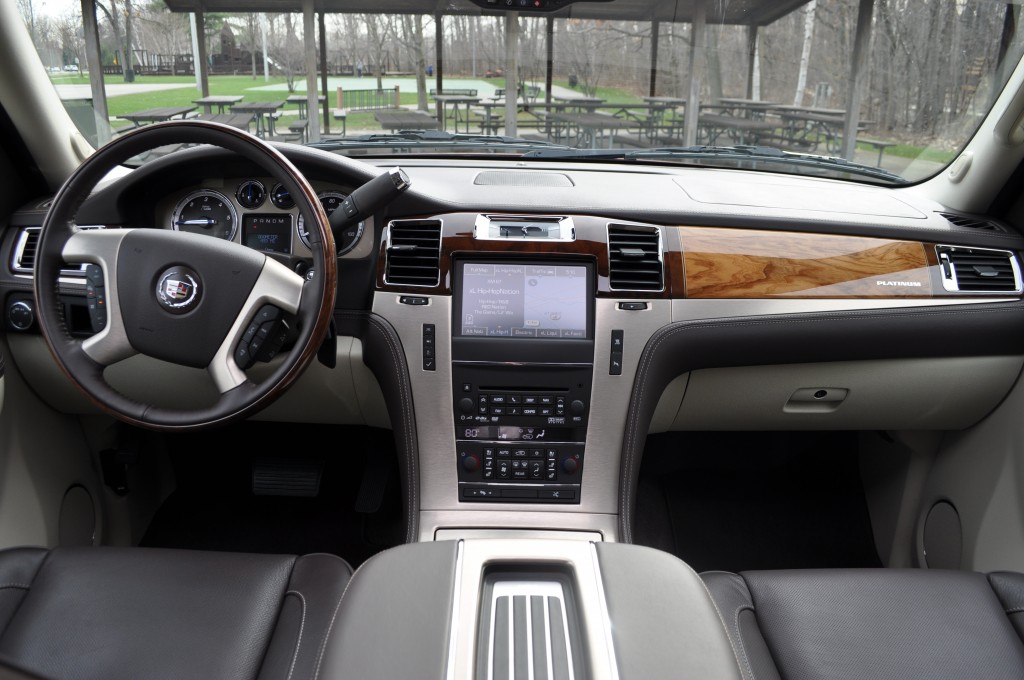 Even though the Escalade ESV Platinum is the range-topper, I don’t think I’m out of line when I say that it could use a few more unique features considering its price. How about something like an UltraView sunroof that we see in the SRX? Or perhaps reclining seats and center console for the second row? Messaging front row seats? Hey, Mercedes has them. Hopefully the next generation Escalade will offer these features, which are pretty much mandatory for such a vehicle.

As the current generation Cadillac Escalade ESV Platinum (and the rest of the Escalade portfolio) reaches the end of its product lifecycle, its go-big-or-go-home looks and power inside and out should continue to grasp the attention of the very few who want to own an Escalade for the sake of owning an Escalade. Here’s to looking forward to the next-generation model which will be on a new full-sized platform.