What If Clark Griswold Drove A CTS-V Wagon?

Cadillac is currently the only brand brave enough (or crazy enough) to offer 556 horsepower in the form of a station wagon here in America, where the perception of a wagon isn’t sexy, nor does it suggest performance. Instead, wagons make most people flash back to scenes from National Lampoon’s Family Vacation, with Chevy Chase’s character Clark Griswold awkwardly driving the fictional Wagon Queen Family Truckster (which was based on the Ford LTD Crown Victoria station wagon) all the way to Wally World. Nobody wants to be Clark Griswold. And even though the CTS-V Sport Wagon falls into the same shape category as Griswold’s rolling piece of lame, this car is anything but.

The CTS-V Sedan variant is a good choice and the CTS-V Coupe is one of the best-looking cars on the road today, but for some reason, the rare owners of the CTS-V Sport Wagon seem to be the most passionate of the lot. And it’s easy to see why. I can’t think of any other car with 58 cubic feet of cargo volume that drives like this. I even used its practicality for picking up my little sister and her teammates from soccer practice (the soccer moms were so jealous). Four people, including myself, fit spaciously, as did four duffle bags and soccer balls in the trunk. And it still moved like stink. It became clear that the CTS-V Sport Wagon could easily be an everyday car — an everyday car with a supercharged LSA V8 engine and Brembo brakes. 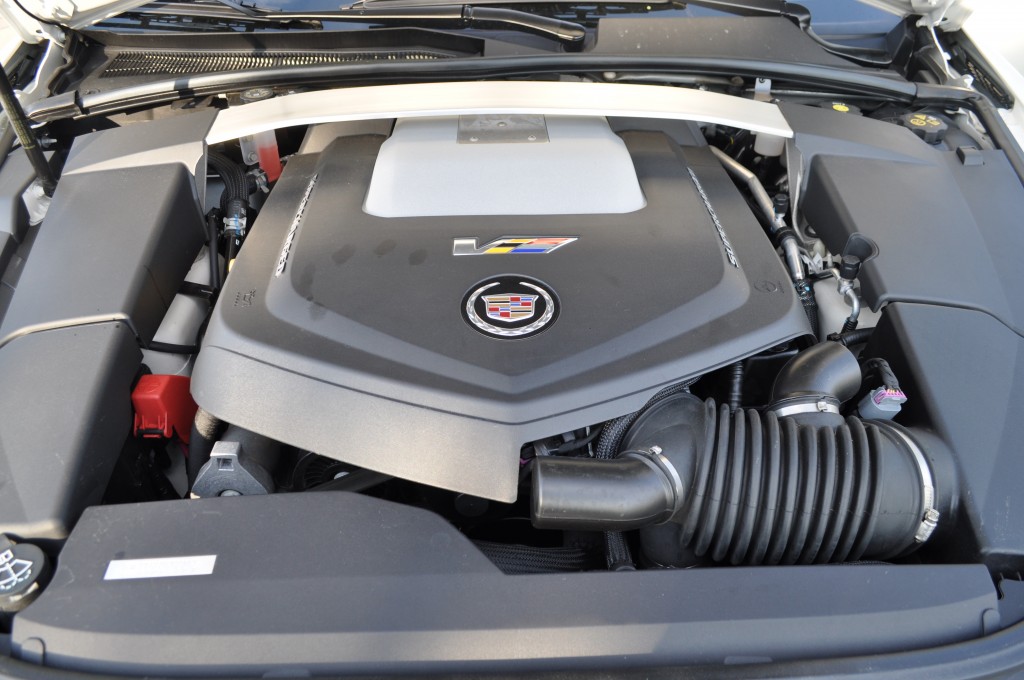 The particular V-Wagon you see pictured starts at $62,165 according to this sheet of paper the media fleet service gave me, but a $1,300 gas guzzler tax and options such as a pair of $3,400 (!) Recaro racing seats, a $995 White Diamond tricoat paint, $600 Midnight Sapele wood trim and a $300 suede steering wheel/shifter option on top of an $825 destination charge puts the car’s grand total at $69,585. Tinker with the online configurator and the price can be maxed out to $70,790. Not cheap, but then again, there aren’t many vehicles that seat up to five, carry loads of cargo, and can drive like this thing does. In that regard, it’s a steal. Other standout features include Caddy’s signature pop-up satellite navigation screen, XM/Sirius satellite radio, Bose 5.1 surround sound, Bluetooth, adaptive forward lighting HID headlamps, keyless access, and — get this — an automatic cabin odor filter. Oh, and a lateral G-meter that sent a grin on my face the very first time I discovered it.

The Wagon’s appearance commands a clean, yet authoritative presence. The chrome accents coupled with the White Diamond paint took me aback as absolutely gorgeous, with different hues of white reflecting off the vehicle’s many angles and sharp lines depending on how the light reflected off its surface. The back-end of the vehicle’s sculpted body is fitted with chiseled tail lamps that run from the bumper to the roof line, emanating a look that resembles a pair of jeweled spikes. Sharp. Very sharp.

The interior — though clean looking — was not as outstanding as the rest of the car. Yes, the 14-way Recaro seats and suede shifter/wheel combo felt great, and the Bose sound system is what you’d expect in a Cadillac, but there were still crude hints of low-budget materials within the car. The keyless access system — which allows anybody carrying the key fob to open the door were it otherwise locked just by pulling on the door handle outside — felt unnatural and forced at first until I got the feel for it. There are better systems out there (Lexus). The Bluetooth system is dated, the buttons on the door looked cheap and I felt like I could pull the tuning knob of the center console right off. But maybe that last part was just a funk my tester had, as it had gone through many a journalist before me. The ergonomics were marginal, making the layout of the Buick Regal Turbo still my current favorite. Though a positive surprise to be found here is the fact that the cabin is quieter than expected.

Under the hood is a supercharged V8 engine, dubbed the LSA, that cranks out a desensitizing 556 horsepower and 551 lbs.-ft. of torque, which is more than an Aston Martin DB9, Corvette Z06 and Audi R8 4.2 FSI. Truly staggering numbers, which are channeled through either a Tremec TR6060 six-speed manual transmission or a Hydra-Matic 6I90 six-speed automatic with a torque converter clutch. Thankfully, my tester featured the former. 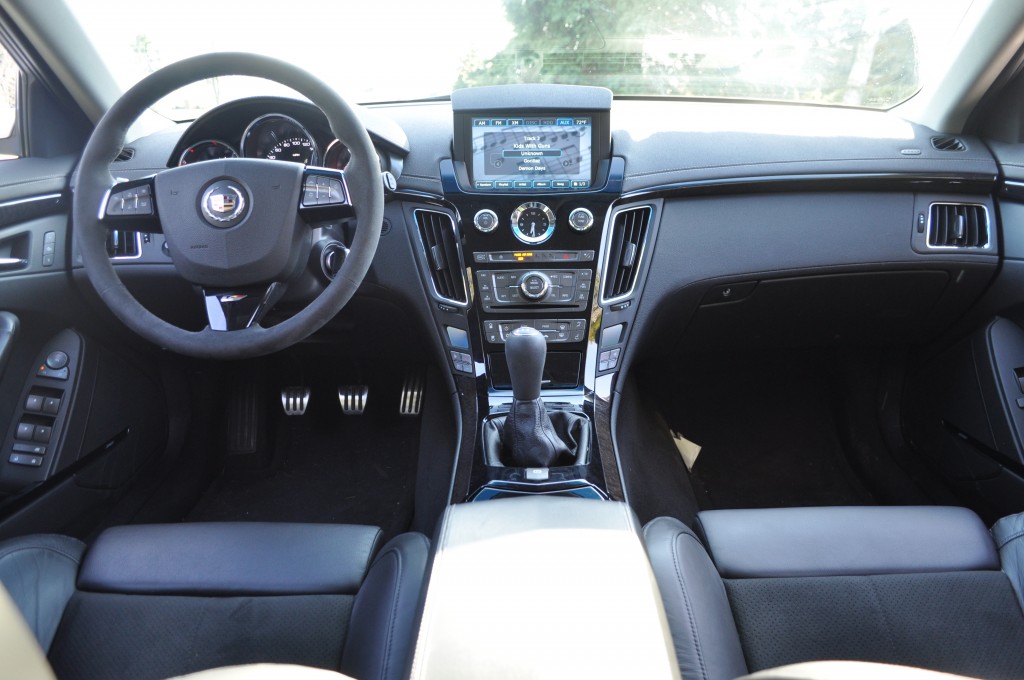 Wanna break your record time for making a trip to the grocery store? This car might help. With 58 cubic feet of cargo space with the second row folded down, you’ll be able bring home more than just a can of tuna fish. Hell, you could rack up a $200 receipt at Cosco, load up your pallets of Gatorade and bulk containers of assorted snacks — possibly Gardettos — and then rocket off onto the highway back home before anyone even realized you left. And it’s perhaps for this very reason that it’s so easy to fall in love with the CTS-V Sport Wagon, since it’s as practical as it is fast. Just remember to have enough money left for gasoline, because it loves premium fuel just as much as any other supercar. For instance, the V-Wagon with the six-speed manual is rated at a mere 14 miles per gallon in the city and 19 on the highway. I averaged 15.5 miles per gallon, with enthusiastic driving (of course). Needless to say, it seemingly shotgunned a gallon of 93-octane fuel down its 6.2-liter throat every time I floored it. 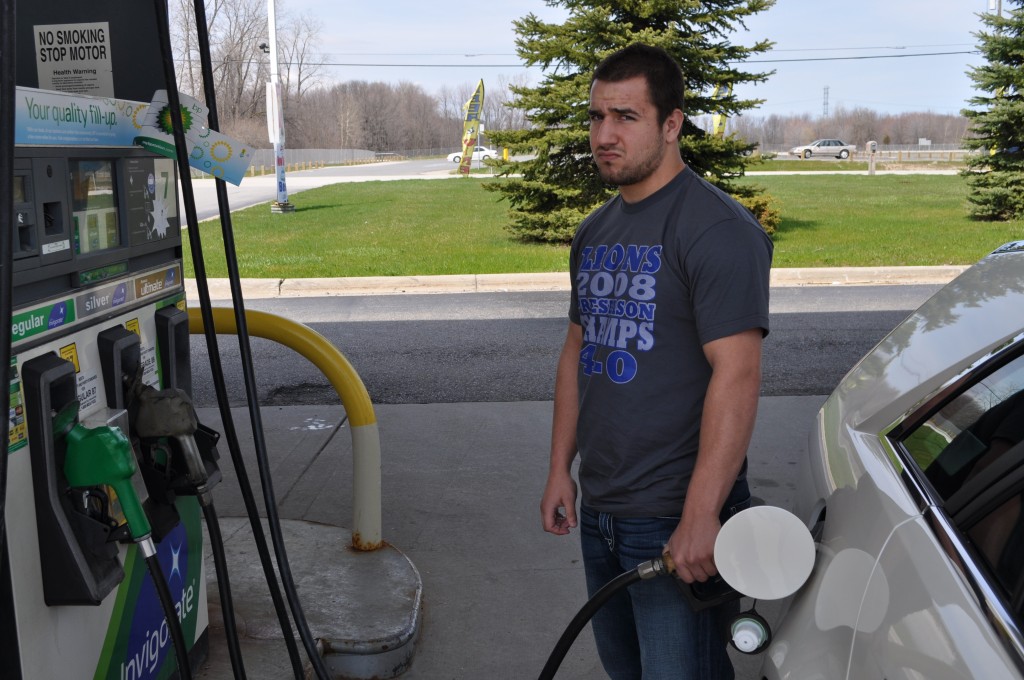 Those words were the thanks I got from a friend after giving her a ride. She clearly didn’t realize the privelidge bestowed upon her, as she was riding in the only wagon in the world that is capable of going from zero to sixty in just under four seconds (with a foot of rollout). However considering that my tester was equipped with Pirelli SottoZero winter tires at the time and not the standard Michelin Pilot Sport 2 tires — which are high-performance summer tires — breaking the four-second mark just wasn’t happening and my observed 0-60 time was a more down-to-earth 4.3 seconds, though that’s still enough to pin anybody’s head back into the seat. Flat out, the V-Wagon will break the 190 mph barrier. Not bad considering the vehicle’s raunchy 4,390 lb. curb weight. Breaking distance was equally impressive thanks to the six-piston Brembos that anchored the car to a halt in just 109 feet from 60 mph, but I did have to press the pedal a little deeper than I was used to.

The V-Wagon’s magnetic ride suspension system draws one word to mind: planted. A confidence-inspiring feel that doesn’t let go of the road, nor does it miss a single blemish in the street, and will carry its occupants around a corner with nearly a full G of force bearing down on it. It could be a little too stiff sometimes, especially going over the many broken seams and cracks on the Michigan roads that I’m only too familiar with. Thankfully, putting the suspension in Touring mode made the feeling of going over such roads better than sitting on a washing machine on its spin cycle.

Like the Chevy Camaro SS, Corvettes, V-Coupe and V-Sedan, the V-Wagon also features a sophisticated traction control system that can be put into Competitive Mode, or turned off completely by holding the button down for seven seconds. When that happens, it’s all smoking rubber from there until the tires finally hook, where thereafter the 551 lbs.-ft. of torque will pull, and pull, and pull some more. Five point harnesses should have been an option. More realistically, so should have been a Heads Up Display.

I would have used “superb” when talking about the suspension but that’s how I would rather describe the car’s exhaust note, which screams that familiar GM LS-engine scream found in the Corvettes. There’s no reason why such a sound shouldn’t be available to download on iTunes for 99 cents, just so I can play it when waking up in the morning, or whenever I get around to it. 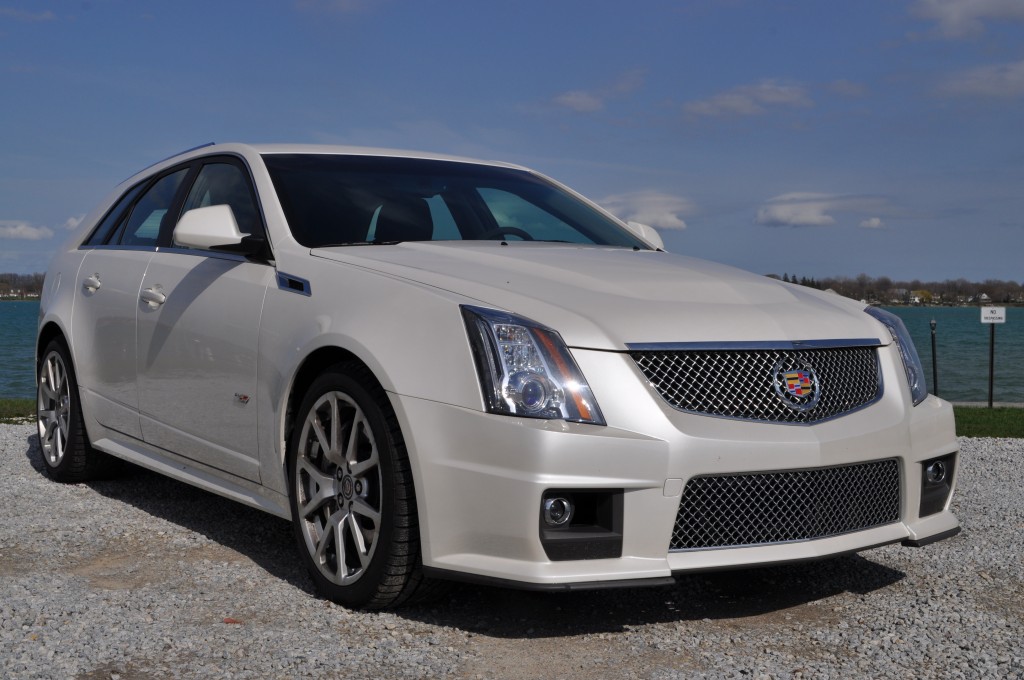 If General Motors could blow away critics with every vehicle it produces the way the Cadillac CTS-V Sport Wagon does, then perhaps The General’s stock really can reach $100 per share. This car drives like a vehicle $50,000 above its price point, while maintaining the cargo capacity to take virtually anything you need for the ride.