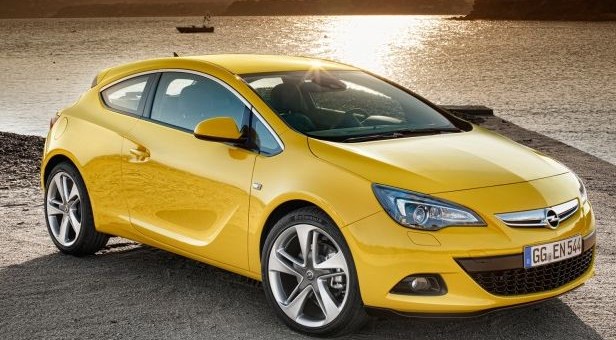 Six weeks ago, General Motors Europe decided to reveal official photos of the upcoming Opel Astra GTC. The rakish hot-hatch is a spitting image of the GTC Paris Concept revealed last year, and shows loads of promise based on appearance alone. Today, Opel finally decided to spill the beans on just what we can expect to power the GTC, along with several technology features.

The most basic powerplant bound for the 3-door hatch will be a turbocharged 1.4-liter ECOTEC engine producing 120 hp (88 kW) and 147 lb-ft (200 Nm) of torque. Another offering of the 1.4-liter engine will give the GTC 140 horsepower, while maintaining the torque output. Above that will be an available turbocharged 1.6-liter ECOTEC with a more potent 180 horsepower. A 2.0-liter CDTI turbodiesel will be available as well, with 165 hp (121 kW) and 280 lb-ft. (380 Nm) of torque and a range that Opel claims to be as much as 1,100 km or 680 miles. All engines will be equipped with Start/Stop technology.  The GTC will also feature a HiPerStrut suspension system at the front wheels and a Watt’s-link (Z-link) suspension at the rear, promising exceptional cornering skills.

As far as new technology goes, the GTC will feature the second-generation OpelEye system, much like the new Zafira Tourer. It will be able to read traffic signs, calculate the vehicle’s following distance and feature a blind-spot indicator. The fourth-generation advanced forward lighting system is present as well, which optimizes road illumination while still sensing oncoming vehicles, and will henceforth adjust the beam range accordingly, because nobody likes the jerk driving with their high-beams on.

In case you’re wondering what was left out, the details on the OPC version of the new hatchback remain disclosed until September, when the range-topper will be revealed at the 2011 Frankfurt Motor Show, possibly along with a convertible counterpart and Corsa-based EV.