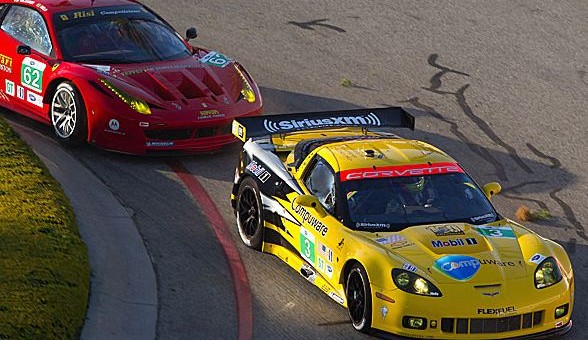 The two hour sprint at the American Le Mans Series at Long Beach race yielded at least one podium finish for Corvette Racing, with Ian Magnussen and Oliver Gavin finishing in second place with the No.4 C6.R, just behind BMW and drivers Dirk Mueller and Joey Hand. Tommy Milner and Olivier Beretta fought their way from the end of the pack to eventually finish fifth place with the No.3 car. The next race is the almighty 24 hours of Le Mans, on June 11-12.

Last night’s WTCC race in Zolder, Belgium gave way to a podium sweep for team Chevy with Rob Huff, Alain Menu and Yvan Muller finishing first, second and third, respectively. This gives Team Chevy a huge lead in both driver and manufacturers points standings. The next round of WTCC racing will take place in Monza, Italy during May 14-15, 2011.

Cadillac still struggles to find momentum in the SCCA World Challenge Series after finishing merely 7th and 8th at Long Beach. Racer Johnny O’Connell feels that the cars are not performing as well as the rest of the pack, saying the cars “can’t compete coming out of the corners, and even if we’ve got straightaway speed at the end, which isn’t too bad, I’m losing eight to 10 car lengths to guys coming out of the corner. It’s just crazy.”

“It’s very early in the program, but we’ll find a way. By halfway through the season I’ll be angry if I don’t a have a win,” O’Connell told Autoblog, showing that he and the rest of the team have not taken their eyes of the prize.

The next World Challenge event takes place this weekend – April 29 to May 1 – at Miller Motorsports Park.