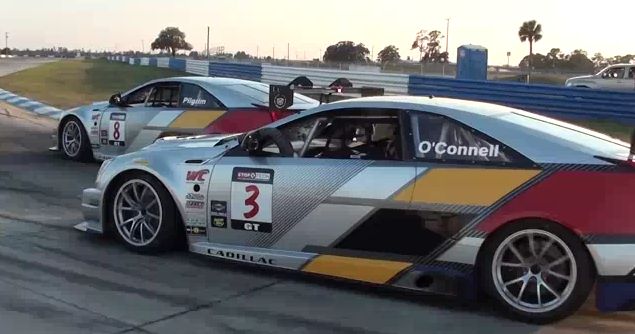 2011-03-24
<div>
<ul>
<li>Final pre-season test of racecars completed this week in Sebring, Fla.</li>
<li>Teams set to compete this weekend in Streets of St. Petersburg</li>
<li>Event marks Cadillac’s first race since 2007</li>
</ul>
</div>
ST. PETERSBURG, Fla. – Cadillac Racing finished a final round of track tests this week in Sebring, Fla., as a pair of CTS-<em>V</em> Coupe racecars prepare for their first weekend of competition March 25-27 at the Streets of St. Petersburg.

The event will mark Cadillac’s return to the Sports Car Club of America World Challenge GT series. Cadillac last competed in the series in 2007 with a racing version of the CTS-<em>V</em> Sedan. Cadillac Racing will compete twice on the Streets of St. Petersburg course: Saturday, March 26, at 11:50 a.m. and Sunday, March 27, at 4:30 p.m.

"We look forward to getting back on the track," said Don Butler, vice president for Cadillac marketing. "We know the competition will be tough, but we’re also confident in our performance credentials. The CTS-<em>V</em> Coupe provides a great foundation for building a world-class racecar."

Johnny O’Connell, a three-time GT1 champion in the America Le Mans Series, and Andy Pilgrim, who won the 2005 SCCA World Challenge GT class in a Cadillac, will be behind the wheel of the CTS-<em>V</em>s. The drivers will participate Thursday at 7 p.m. in a webchat on the Cadillac Facebook page, which also will carry updates from this weekend’s races.

Both drivers were impressed with the CTS-<em>V</em> Coupe racecar as they finished track tests this week at Sebring and prepared for the Streets of St. Petersburg race. The event kicks off the 2011 World Challenge season, which has eight races from March to October.

"The St. Pete race has a great atmosphere," Pilgrim said. "Fans can get really close to the teams in the paddock. The track has some classic street-course tight sections and really good fast corners on the backside."

Said O’Connell: "St. Pete is a beautiful circuit with lots of challenging areas. I’ve won there before, which always makes it nice to go back to. The CTS-V Coupe racecar has been very nimble during testing and seems to brake very well. I not only expect it to do well on a street circuit, but everywhere we compete."

The racecar shares the production car’s distinctive wedge shape, an aerodynamic design well-suited for the track. A deck-lid spoiler was added to the racecar for increased traction in turns.

"The tight timeframe presented a challenge for the team, but we were fortunate to start with an extremely capable production sports car," said Mark Kent, head of GM Racing. "The CTS-<em>V</em> Coupe translates well to the track. The production version already provides plenty of power and exceptional handling."